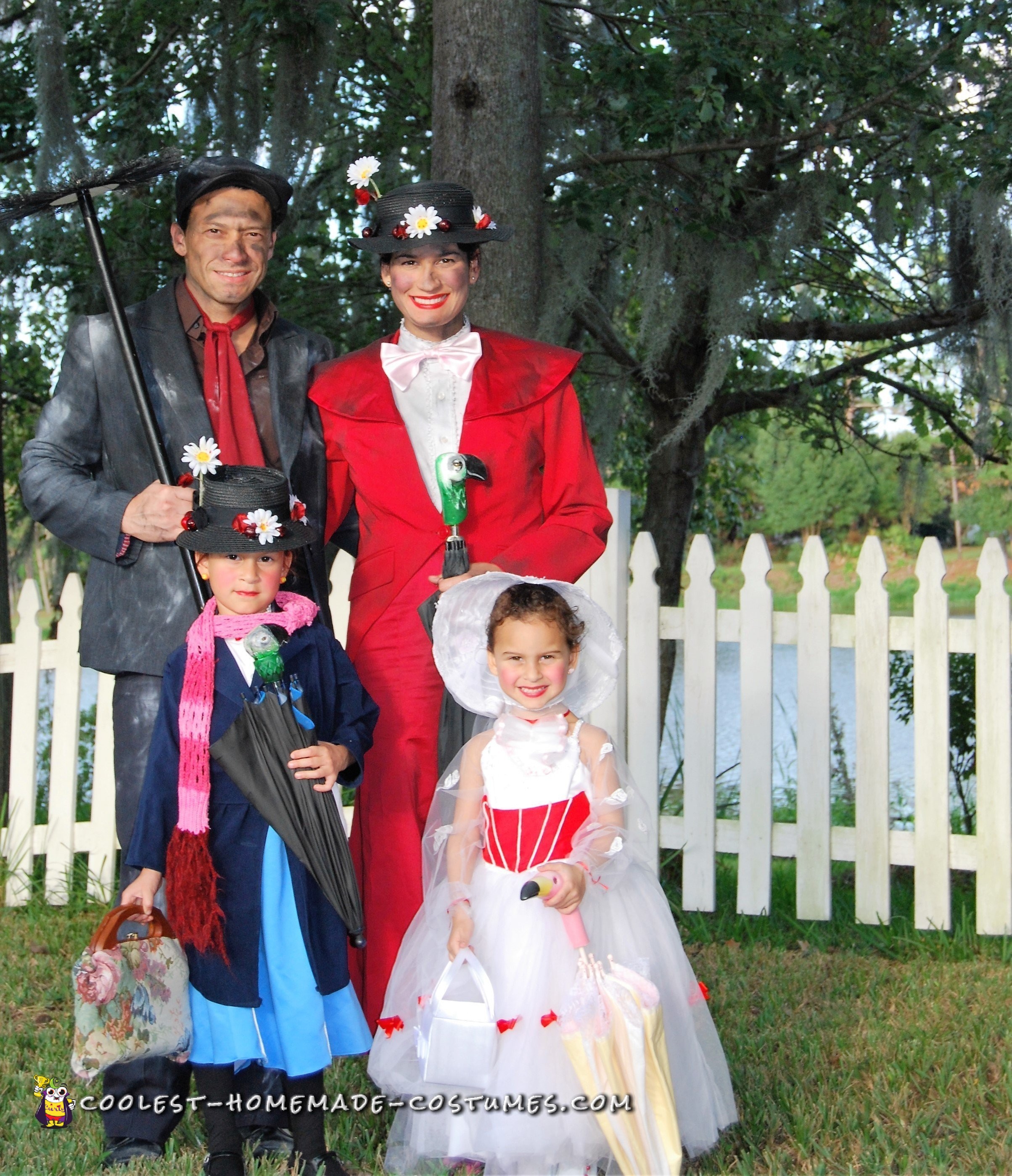 Our family loves dressing up for Halloween! We love it so much that the night after it ends we begin to ask ourselves what the next year’s costume theme be! We have made it a tradition to find a theme that would make sense as a family and our girls always take part in helping us come up with it. Luckily, my husband can create anything imaginable and this year was no exception. This Summer our then 3 year old was obsessed with Mary Poppins. She loved singing along and pretending to be the magical nanny. She wanted the songs to play non-stop and I had to limit her to watching the movie once every couple of days! So when my husband again asked what our family’s theme would be, she immediately decided she wanted to be Mary Poppins. My oldest (5) said she also wanted to play the part, so in order for us to keep the peace, I offered for all of us girls to all be her.

They thought it was a great idea and we each picked our favorite part of the movie. My oldest loved the part when she was first seen flying down from the sky. My youngest loved the Jolly Holiday – Supercalifragilisticexpialidocious part (she can even say the word!). I chose the soot filled Poppins with my husband as the chimney sweeper Bert. We immediately began to get to work inspecting details of the movie before gathering all the pieces so that my husband can begin his detailed work.

For the first outfit (flying Poppins), we gathered clothing from a second hand store. The problem was that my daughter wears a 4/5 and the coat was a woman’s size 8 and the skirt came from a size 12 gown. The coat was taken in several times from the back and the sleeves cut and narrowed. A belt was made from scrap fabric and the button moved up to for a better fit. The grown was cut down to a skirt which was then linked to a white button-down shirt to create one solid piece.

The collar of the shirt was cut Victorian style and lacey trim and a tiny bow tie were added. Two white piping pieces were added to the skirt to finish the outfit. Shoes were glittery black from the second hand store which we spray painted solid black, stockings were store bought.

The scarf was cut out from a white knitted sweater, dyed pink, given red stripes and red yarn was added as the fringe. We found a black straw hat online (purchased 2), my husband had to shrink it by cutting and gluing it to fit my daughter’s head.

The flowers were purchased from a craft store and after frame by frame movie inspection of the detail, these were placed according to how the character wore it including adding red dots to the inside of the white daisies. Gloves were handmade from “stretchy” white fabric (hard to find child gloves in FL).

A child pink umbrella was spray painted black and a parrot head was made from ceramic clay & kiln fired (yes, I do ceramics and we own one). The paint for the parrot head detail was hand painted by my husband and glued to make the handle. Her carpet bag was a first aid kit we had which was sprayed with adhesive and the fabric was conformed to.

The Jolly Holiday outfit came from a second hand “flower girl” dress sized for a 7 year old (my 3 year old wears 2/3T) and a woman’s “fancy” hat. The dress was taken in several times from the back and the length was shortened to fit. Some of the fluff/tulle was also removed. Small red bows, a hand sewn garter with white piping and tulle sleeves were added.

Lacey flowers were cut out from a ribbon and hot glued on the sleeves. A collar with a handmade ruffle chest piece was added. The hat was sewed to fit her tiny head and some of the flowers on it were spray painted light pink. More tulle was added to the back of the hat and an extra head strap.

We found boots her size in a consignment store which we spray painted white and pink detail was hand painted. The red “buttons” are tiny kiln fired ceramic circles which were spray painted red and glued on the boots. Her umbrella was completely reconstructed.

The original material was taken off and a white and yellow pattern was placed outside and pink and white for the inside with added lace on the edges. An old garden flamingo’s head was cut and glued as the handle.

For my outfit, a red suit was purchased from a second hand store, which only the jacket was used. We headed to the fabric store to match the red and texture to create an exaggerated sailor type collar. The front of the jacket was reconstructed to match. Fabric was also purchased to create a long red skirt. Similar work from the first outfit was done on one of my husband’s button down shirts and feminized with the addition of lace.

Light pink thick ribbon made the bow tie. Shoes were spray painted pink and a medallion was made from PVC pipe, spray painted to match Poppins’ and then sewn in place. The suit and the shoes were given a coating of black spray paint to simulate soot. The hat mirrored the one for the first outfit. My umbrella was also created in the same way as the first outfit (we spray painted a zebra umbrella to black). For the soot make-up, I smeared loose eye shadow all over my face.

My husband’s outfit came mostly from his closet. The scarf was a piece of jersey fabric, spray painted a bit to make it seem dirty. We found the hat online but it required some dye to make it darker. His chimney brush was made from broom bristles which were hand glued to a round cardboard cut out then attached to a spray painted broom stick and cut to short. My husband puffed some baby powder all over himself to seem ashy.

Our girls were so excited about their costumes and ours that we decided to treat them to go to Magic Kingdom as a pre-Halloween night festivity. Almost everyone there went crazy over these! So many people loved these costumes! Young and old recognized who we were and SO many people wanted pictures with us! If we stopped for our own pictures, we would draw crowds of people, even when casually walking to get on rides, people would constantly stop us and ask to take pictures of us with our girls. Some people would just yell out “you win!” or “you guys look awesome!”. Other said it had been the best costume they had seen all day. I was asked twice by park guests if I worked there! Everyone was just so amazed and I loved how happy it made everyone! Our girls were initially weirded out at people’s reactions and the asking for pictures but as the night went on, they kinda got used to it.

The following night was Halloween and we went through our neighborhood, we often heard gasps and saying how we should enter a contest! Others would see my husband and I and say a sweet “Aww” and then look down to our girls and gasp in amazement and then ask for pictures! We felt like true celebrities for 2 nights. It was one of the most amazing costumes my husband and I have pulled off, and everyone’s reactions confirmed it!

Our girls keep us very busy and it was practically impossible to work on these while they were around. All that could be done was to take some measurements and that too was challenging, since it involved lots of pins. Work would mostly take place after their bedtime or while they were in school. My wonderful husband created these with no experience, just his dedication and perseverance. At times he would take the bin full of pieces to the fire station he works at and work on them between calls. He sewed, cut, glued and sprayed countless hours to create these mini replicas for the apples of his eyes.

In addition to all that hard work, we had to re-create the 2 black umbrellas for Halloween and the bag because of a gigantic mishap on the night we visited the Magic Kingdom. Long story short, our stroller was stolen with these items in it. The people that took it were apprehended with our stroller but they had disposed of our precious items and did not admit to where they had thrown them. My husband had to re-make the umbrellas and handles the morning of Halloween. One handle was carved of wood, when this was too hard, the other was made from foam, then repainted. We reupholstered one of my old purses for my daughter’s “carpet bag”. You may be able to see the slight differences of these from the pictures taken at Disney vs. the backyard. 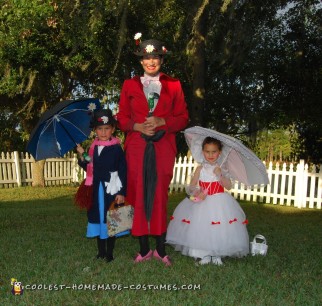 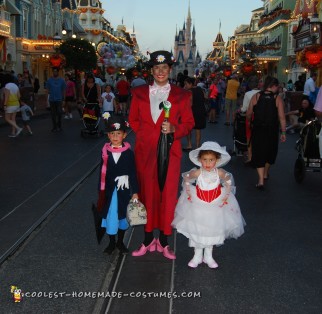 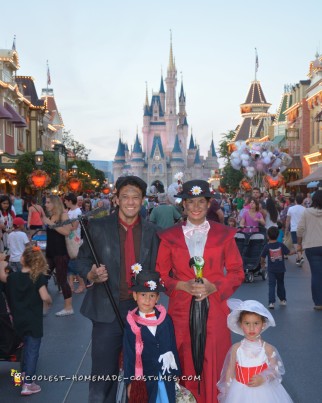