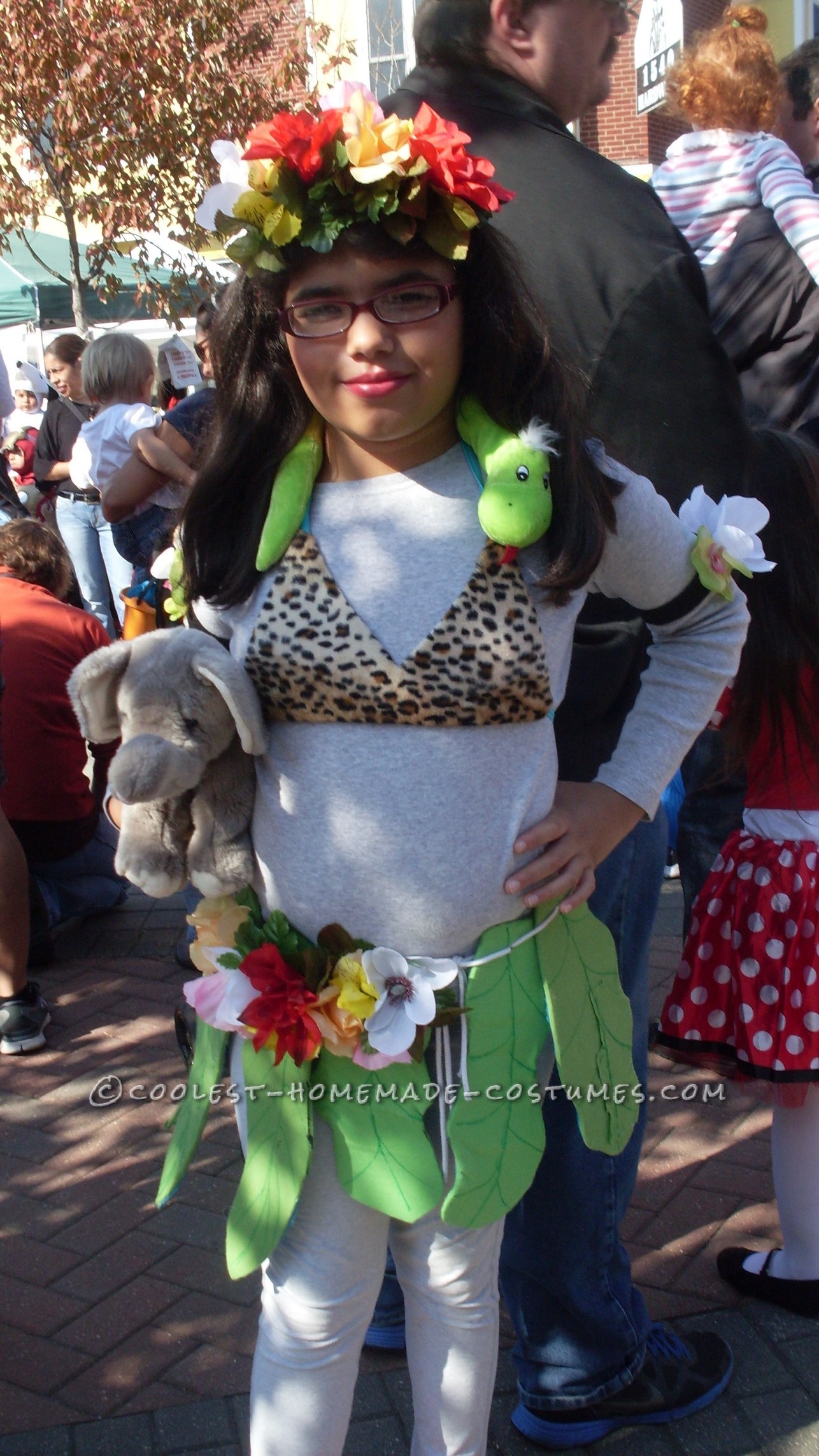 This costume started as a totally different idea, so this is how it ended like it is. It all started with a local contest in which kids participate by age group and there is also a category for dogs (super cute!), for that purpose, we decided to made a homemade costume, which initially was though to be the Lady Sif (from the movie THOR), so I had picked up an empty computer box discarded in the office (to made the shield and sword).

Work, study, and other thousand things left us short of time, so we cancelled the initial idea and went to Internet to get some easier ideas. We wanted to make something non-common, and ended up on this web site where we found a photo of a group costume of three kids as LMFAO (Rock Party Anthem), that was awesome! Then decision was made from something from a music video, long story short, my daughter loves Katty Perry, so we landed on YouTube and agreed on the video ROAR.

In the video, she crashes in a plane in the middle of the jungle and she adapts to survive, so at the beginning she has work clothes all spoiled and dirty from the crash, then she changes them for a skirt made of leaves, and a crown of flowers and a scarf is made into a a top with leopard pattern, very Tarzan style. That final clothe from the final of the video is what we wanted to copy. Now, we didn’t have anything green at home for the skirt made of leaves, except for an old shirt (mine), but too soft to make it fell with any sort of shape. That’s when the light bulb came! And there is the abandoned box that we almost discarded.

The leaves for the skirt were cut from the box sides, and each one wrapped with the green fabric from my old shirt, using a glue gun and some blue felt for the back side (the blue felt was leftover from last year costume: my little pony Rainbowdash, also homemade, lot of hand sewing). The leaves were tied together with a string. For the top, we had a remnant fabric with the leopard pattern (we used it to sew some new cushions for the sofa like four months ago), it was less, but just enough to cover the top of her two piece swimsuit.

For the crown of flowers, and the armbands, I bought plastic flowers from the dollar store, and glued them to a headband and felt strings, also put some flowers on the skirt. We added a plush serpent (not in the video) to the bra, since the swimsuit’s original color is blue so it looked weird, the solution was to glue the serpent to the string so the blue is hidden and also looks like she has it hanging around the neck, which we think looks way cool. That’s it; homemade, most recycled.

For the contest day, she wears a gray shirt long sleeve and leggings under the costume, yes super-weird, but is autumn and the day was very chilly! Funny part was that every person that commented on or liked it totally mistook it for a hula dancer (really? hula dancer? like fourteen people told it was a cute hula dancer!) We didn’t win the contest, but had a great day anyways, and believe it or not, there was another girl participating in Katy Perry costume (but with the candy dress she wears in a different video). That’s the end of our mom and daughter made costume. She, as I, loves craft, and I made the costume myself; it was a fun family time.

For the skirt, cut leave shapes fro a cartoon box, as many for cover you all around. With a green fabric cover each leaf and with markers paint the leaf veins. Twisted then a little so don’t look so straight.

Made holes in the upper end of each leaf, and tie then with a string, we use double strings so they remain fixed in the position.  With plastic flowers made a little sash or belt and glue it to the front of the skirt.

For the armbands, cut two inches wide strings in black felt sew it so they can fit around your arm, and glue two flowers in each.

For the flower crown, with the green fabric cover a plastic headband, the glue more flowers to it to create a thick flower tiara.

To make the leopard bra, take leopard fabric and cover the top part of a swimsuit,  glue a plush serpent around to the string that goes around the neck.

For the finish touch just add make up (red lipstick) and we add also flowers to the sneakers. She also carried a plush elephant to gave more jungle effect.