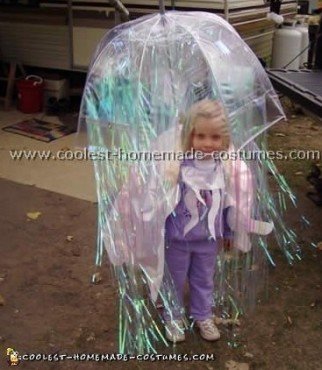 My daughter loves fish. We decided we could make her a great jellyfish costume. I found a clear umbrella from Target. It ended up costing $20 but we have used it after the fact as its intended use.

We dressed her in violet like the main color of the streamers. The dilemma was how could she trick or treat carrying an umbrella.

My husband thought of using a backpack! So, we stuffed a pillow in it and then used a backpack with dual zipper that closed at the top and center of the backpack opening. This was great because it allowed the umbrella post to sit balanced above her head. We covered the backpack with an iridescent tablecloth from the dollar store. I cut the tablecloth with streamer like edges and she wore it like a cap.

It left both her hands free to hold a bag for trick or treating. Even better, she was protected in case it rained while she was out getting candy! In addition, it was very light weight.

A little time is needed to get the right pillow to backpack ratio and we ended up typing the backpack closed with string as the zippers were pressured by walking movement. When she wanted to take a break she just took the backpack off.