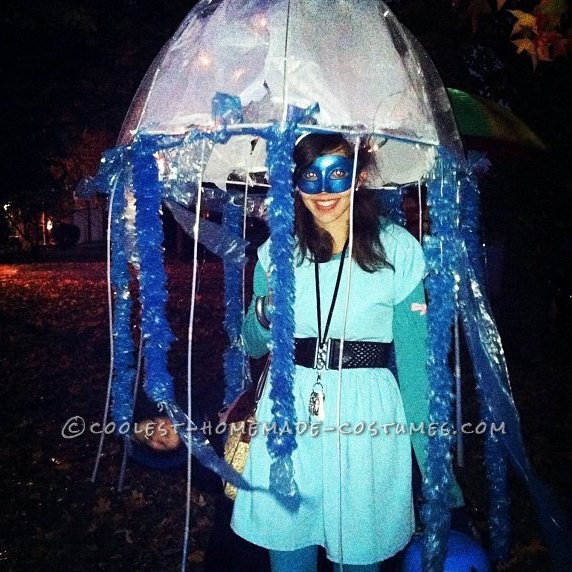 I wasn’t going to do this costume till I found the umbrella. The total cost of the costume was around 35  dollers. The weather trick or treating was very wet yet I stayed dry the whole time and warm. At almost every door someone had to call for someone else to see me. People were talking about it from across the street taking photos and saying how cool it was.

I got the umbrella from wallmart, the glow stick from the doller store, the leis from party city for .40 cents and christmass lights from hobby lobby.

Well this web site really helped. There are so many great ideas for Jellyfish.

1. I took plastic bags and with clear tape stuck them everywhere I could on the inside of the umbrella. If I had to do this costume again I would have done a colored bubble wrap but I didn’t have the time to go find some.

2. Taped the battery box part of the lights on inside wires same with strobe light. Then taped lights to bags. In a few places it would hag down but it gave it texture. I wish I had bought stronger batteries the lights died at the end of trick or treat.

3. I cut and tied all the leis to the umbrella and I undid some to have a diffrent effect. Don’t cut them the same length.

4. The Glow sticks should be left fot the last minute. I did mine even the night before and they stoped glowing when I acidently broke them. I taped all mine on. Make sure that the strongest part is where the umbrella meets the stick. Mine fell of to many times so I carried tape with me. If you wrap up in the glow sticks in the leis it will be stronger. It took a few hours of walking around and stuffing it in and out of cars to get them to stay through all of trick or treat. 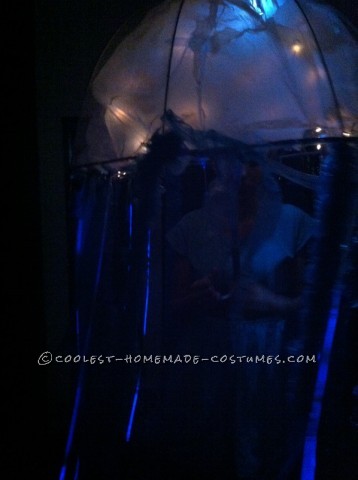 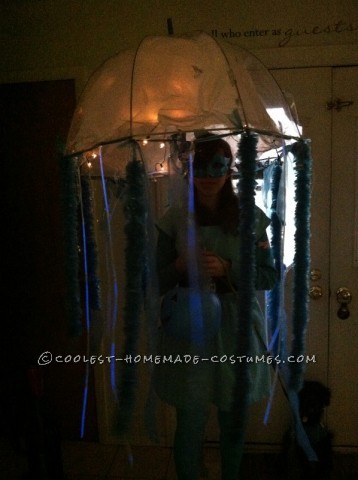