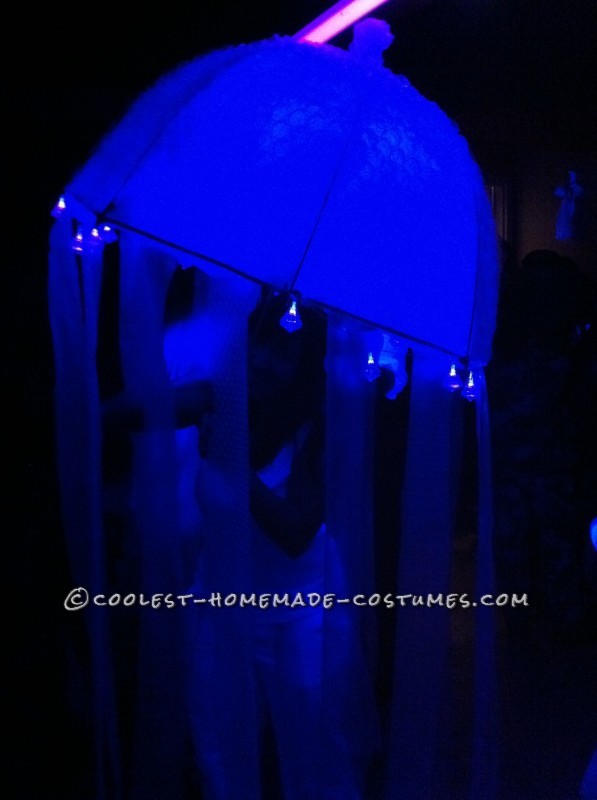 I wanted a unique and fun costume to impress our friends at our 8th annual Halloween Party, and this amazing jelly fish costume certainly did just that – and it was relatively simple and inexpensive to make. For the main Jelly fish body I started with a clear umbrella (I purchased mine at Target). Because we have a lot of black lit rooms at our party I used two strands of battery operated black lights to light up the body.  I used scotch 3M super tape to attach the lights to the bottom rim of the umbrella. I also found some black light aerosol spray that I applied to the inside of the umbrella (I found the lights, tape and spray at Target as well).

I wanted some texture to the body, so I purchased some bubble packaging wrap and covered the outside of the umbrella. I used a hot glue gun to stick the bubble wrap to the rim of the umbrella. From Jo Ann Fabric’s I bought a yard of iridescent material and cut it into long strips and attached them (along with some strips of bubble wrap) to the rim of the umbrella to hang down like tentacles. I wore white pants and a white top and attached some small strips of the iridescent material all over – I even braided some into my hair.

Costume Hits: Everyone was very impressed with the costume and its originality as well as how pretty it looked – especially in the black light. Because I used an umbrella and didn’t attach it to my person, I could set it aside if I needed to (like when using the restroom or filling food/drinks).

Costume Misses: The umbrella was big, so getting through our doorways was a little tricky.  Also it got a little heavy after a while (the battery operated lights were a major source of the weight). 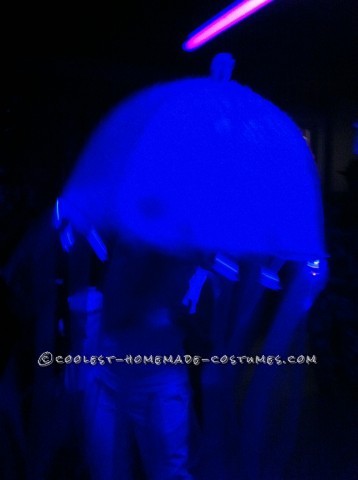