My wife, Amber, and I were in a bit of shock.  We knew that putting two embryos in could lead to getting two babies out, but after seven rounds of IVF and only one living child we seriously doubted ever having both embryos survive.  Yet they did, and there they were.

Still, through my shock a single thought came to my mind.  I looked at my beautiful wife, squeezed her hand and blurted out, “Luke and Leia!”

“No!” she laughed at me, barely able to contain her own tears of joy.  When I pressed her about it later she said, “they can go as Luke and Leia for Halloween, OK?”

Yes, that would be OK.  Very much OK.

Amber took charge of the actual outfits for the kids, contacting costume makers she knew on Etsy and recruiting her mom, an expert seamstress in her own right.  My job was to make our Radio Flyer into something… appropriate.  Originally Amber proposed I turn it into a X-Wing, but I scrapped that idea in favor of building the Millennium Falcon around it.  While easier to build than a X-Wing, it posed it’s own challenges.  I started building in August, grabbing a half hour here, an hour there while the kids napped or late at night, but the end product has been well worth it.

At first I thought I would make it out of cardboard and PVC pipes, much as I had done last year in building our older son’s P-51 costume, but the cardboard proved itself not up to the task of maintaining structural integrity with a gaping hole in the middle of it.  Thus, I had to switch to hardboard and 1x4s.  Heavier, yes, but strong enough that I expect we’ll see years of use out of this costume.

I used the scrapped cardboard pieces to trace the pattern onto the hardboard.  Then I reinforced the edges with small pieces of 1×4 to serve as a foundation for the curved sidewalls.  I used a combination of very strong glue and pneumatically driven staples to secure all of the pieces.  I then test fit the shell over the Radio Flyer and found the best places to fit the major structural members.  More glue and some pneumatic nails and the foundation was finished.  And so was the easy part.

Next I tackled the cockpit.  I had a section of ABS Schedule 40 pipe left over from another project and decided it was the perfect size.  I was lucky enough to find a landscaping atrium drain in almost the ideal dimensions to serve as the actual cockpit.  Some quick work with my rotary tool improved it’s looks a lot.  Cutting the pipe was tricky and I had to do it all by eye as I really had no way to transfer precise measurements onto the surface.  I just attacked it with a band saw and got lucky.  The cockpit and access tube were finished and attached with only a little extra stress.  OK, a lot of stress.

Now to make it look more like the Falcon it needed details, namely the little doodads professional modelers call “greebles” – bits scavenged out of innumerable other modeling kits.  I did not have dozens of other models to “kit-bash” and even if I did the plastic bits would probably not survive five minutes exposed to my kids, much less the open street.  But what I did have is an abundance of scraped computers.  The details on the sides are a mix of wood cut to shape, aluminum heat sinks, interesting metal and plastic bits from computer cases, transistors, and even a pair on PentiumⓇ CPUs.  The satellite dish is a plastic bowl bolted to PVC pipes, designed to be removable and repositionable, and therefor less breakable. 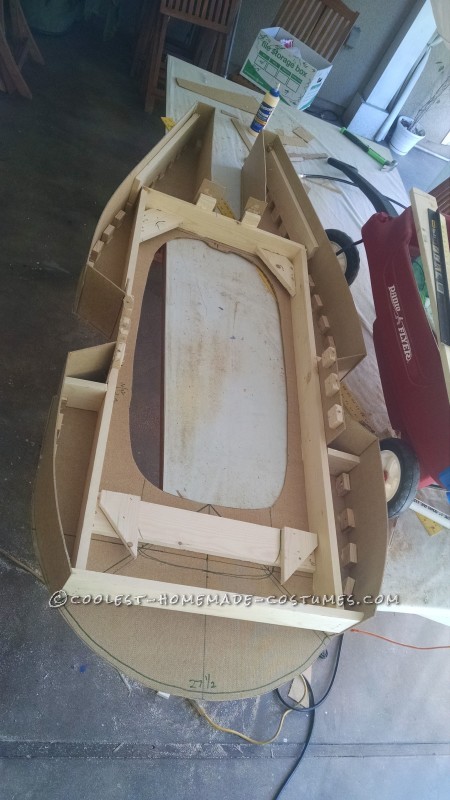 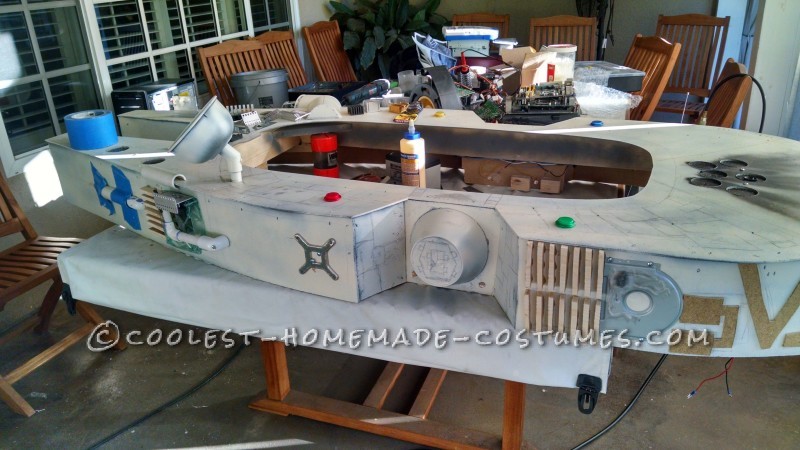 Next up was the lighting.  The engine is comprised of 78 blue LEDs, there are two LEDs on each side of the ship (one red and one yellow next to the escape pods), and six white LEDs up front.  I used 1.8” polycarbonate for both mounting the blue LEDs for the engine and for the mask that gave the engines their distinctive look.  The rest of the lights are simply mounted right in the hardboard.

Sound is supplied by a very clever kit I found online and offers 300 seconds of total playback time, four triggers, and a USB interface.  It’s actually designed to be used in making your own talking teddy bear, but with only a few modifications it works perfectly for this project.  I connected it to some surplus arcade buttons I had and now it plays back sound from the original trilogy: engine engaging light speed, blasters firing, Han Solo saying, “Let’s blow this thing and go home,” and a custom track of Chewbacca roaring and laughing mixed with Princess Leia complaining, “will somebody get this big walking carpet out of my way?” 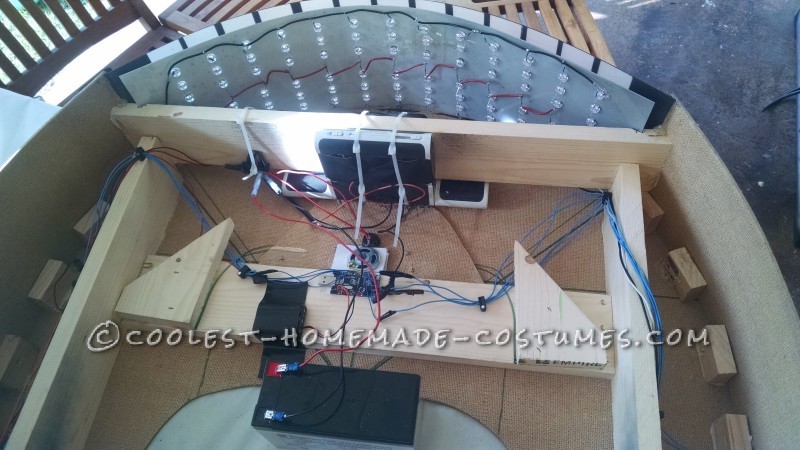 With the lights, sound and details installed I could now attack the painting.  I started with an undercoat of grey primer followed up with plain almond spray paint to keep it consistent with the movies.  Then the painstaking work of drawing all the seemingly random lines on the surface.  After I finished drawing the lines, I filled in some of them with grey, others with maroon.  I cut out a sections and filled it with more greebles.  Then I took some black paint and used the dry brush technique all over the details, attempting to make them look dirty, old, beat up, used, lived in.  I even used some metallic spray paint to add of fine mist of “dirty” all of the ship.  And lastly, I sprayed the whole thing down with a matte finish sealer.

During the whole process my kids, Christian age 3 and the twins, Emilia and Johnathan, now 9 months old, loved sitting in the wagon with the ship shell over it, pressing the buttons and switching the lights on and off.  Amber had received the costumes from Etsy and they were adorable, but we resisted the urge to try them on for fear they should decide that was the perfect moment to spit up.  Christian’s costume was made by Amber’s mother Linda: blue pants with the red stripes on the sides, white shirt with the open collar, and the vest she custom sewed herself.  I even made him a little belt and holster just like Han Solo’s. 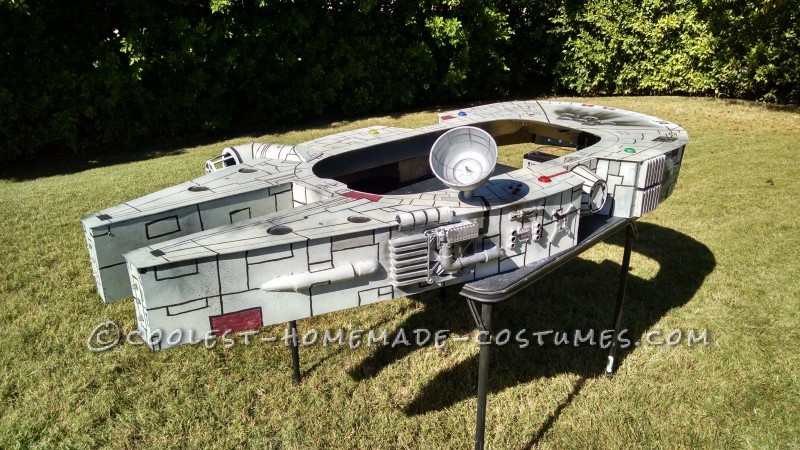 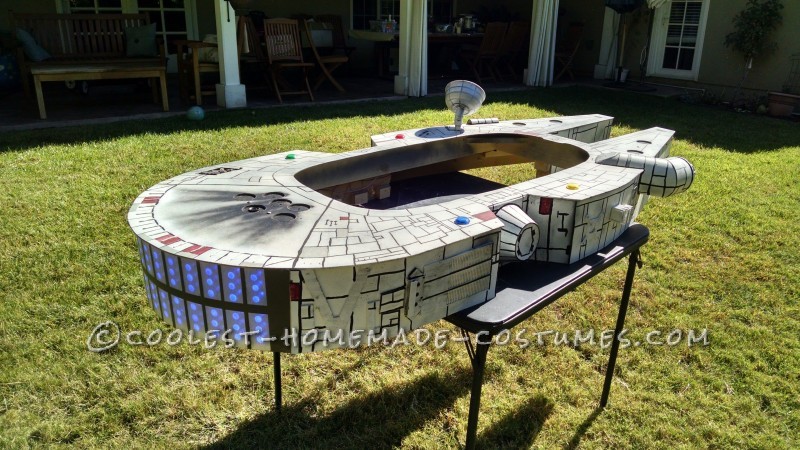 Halloween came and Christian had to leave his costume at home since his preschool sadly doesn’t allow costumes.  Amber, Linda and I took the twins to the Halloween walk in the Glendora Village.  I loaded the shell of the ship on top our minivan.  I knew it was going to be a hit as were getting honked at and cheered even before we parked.  Once the shell was mounted to the wagon, kids loaded up and in costume for the first time, it was magic.

We couldn’t go five feet before being stopped by people wanting to see them, comment on them, and take photos of them.  Thankfully everyone was very polite and asked first before taking a picture.  We were deluged with comments, bombarded with compliments, awash with praise.  I’ve never experienced anything like it.  Last year with the P-51 costume we got a lot of nice comments, but nothing like this!  We didn’t even get the chance to walk the whole Village since it was taking so long what with being stopped constantly and the twins having a very narrow window between naps.

That evening, however, was a different story.  I am very sad to report that we didn’t get to go trick-or-treating.  Christian came home from preschool and within a few hours it was obvious he wasn’t feeling well.  He refused to put on the vest his grandmother made him, refused to eat dinner, and was generally clingy and cranky.  We aborted all ToT plans and put Christian to bed early, and he went down without complaint and passed out almost immediately.  We even left him in his costume since the pants are sweat pants and the shirt just a waffle shirt and that’s what he wears to bed anyway.  With no toddler with us it felt kind of silly to take a pair of 9-month olds our to gather candy they can’t eat, so we just scrapped it all.  The next morning we awoke to find Christian had vomited in his sleep.  This, of course, means it was a good thing we didn’t push it and force him to go trick-or-treating, and that he puked all over his costume that he never got to wear out.

But we got to go out that afternoon and the twins had a great time.  There’s always next year, and hopefully the kids will want to be Star Wars characters again.  In the mean time, we’re expecting to use the Millennium Flyer at concerts and movies in the park in 2015 and as long as it holds up! 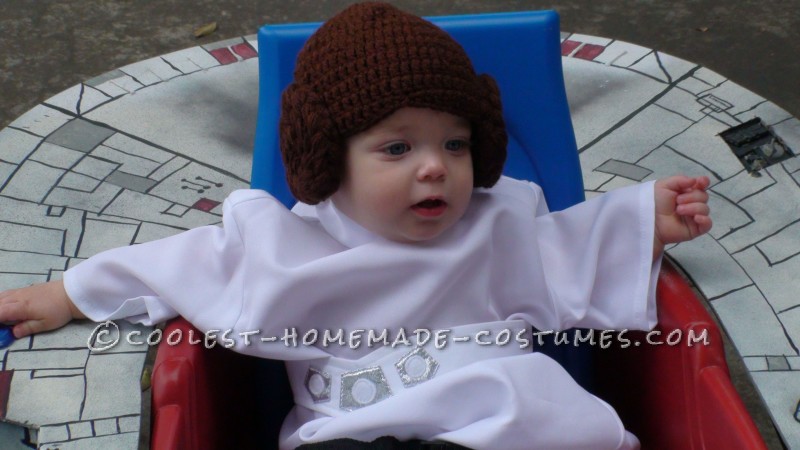 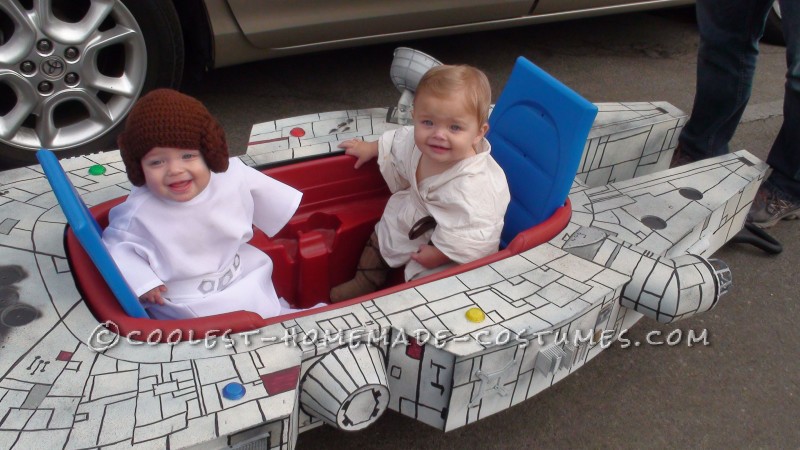 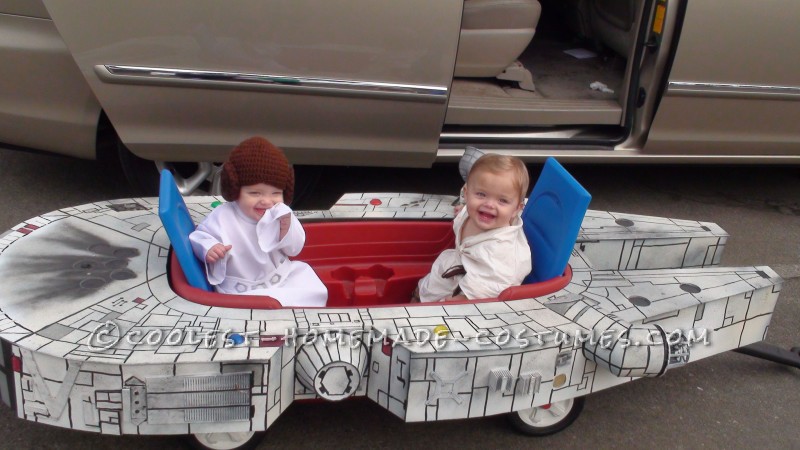 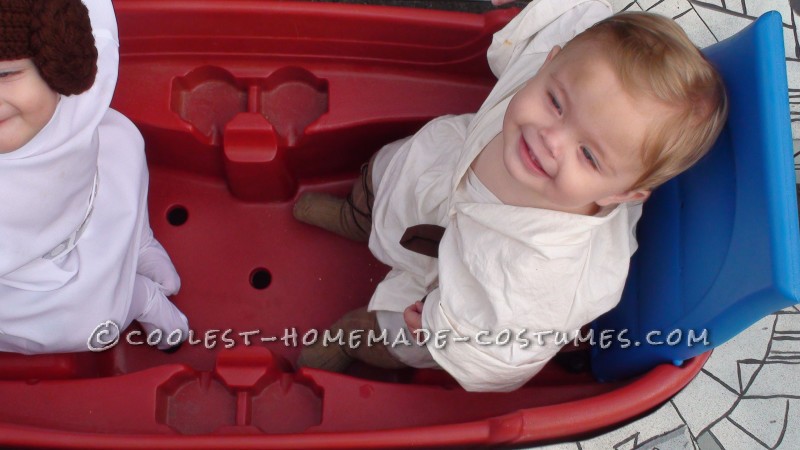 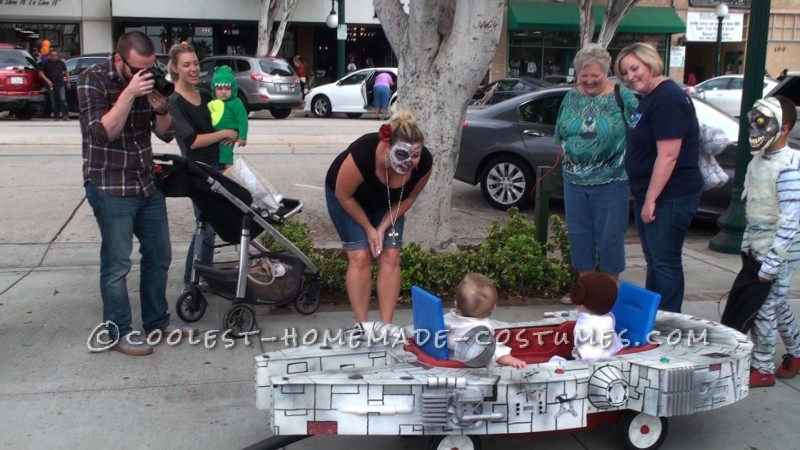