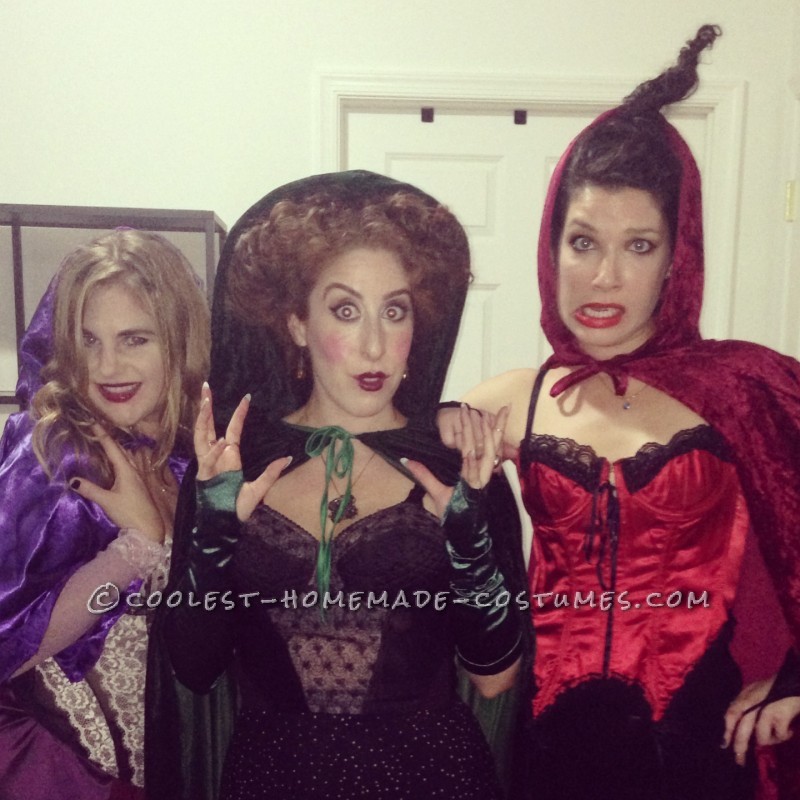 When I proposed the Sanderson Sisters to my best friend we knew we wanted to piece it together from scratch and not just buy the full dresses. We also knew that we would need to add as much detail as we could to create a true to the movie costume. I bought the crushed velvet, green hooded cape and my friend bought the red one. The blonde sister required a purple cape and found a short hooded one, which turned out to be even more true to her character’s flirty role.

Next, we pieced together the costumes from what we already had in our wardrobes. I had a couple vintage corsets from previous costumes and theater performances so I wore one and lent the red one to my friend playing Mary. We used our flowing, long-in-back witchy skirts and paired them with stripped stockings. Mary Sanderson’s costume was completed by her hair and makeup. I gathered her hair on the top of her head and wrapped it around foil in an adjustable and pointy shape. With her red lips, crooked smile, and her green vacuum to fly around on, she was the image of Mary Sanderson.

For Winnie’s costume, I found the exact green and black stripped stockings that she wears in the film and paired them with my vintage lace up brown witch shoes; it was a perfect re-creation when worn with my ornate corset and flowing star-dotted skirt. My crowning piece was literally on my crown since I was able to create a hairstyle exactly how Winnie wears hers. I took a disposable paper cup and rolled my hair around one from each side, pinning my red curls into the center of my head. I happen to have thick, red curly hair and a talent for creating elaborate hair styles. I mirrored her cheek makeup as well as lips (only filling in the center of the mouth) and I’m proud I was able to re-create her look exactly.

The most import accessory I had was Winnie’s magic spell book. It plays a huge role in the film and I knew I had to carry one around to cast spells with. I went to one of the many book sellers on the streets of New York’s upper west side. I chose a book that when removed from its slip cover looked like it could be old and a spell book. I found a thick book with a brown cover so I purchased it for five dollars. At home I completely submerged it in water and let it soak for a couple minutes. I then I laid it open near my heater and carefully separated many of the pages in groups.

As the week passed and the book continued to dry, I moved the pages so they would dry differently and not all clump together. I also took a knife and carved into the cover of the book so that it looked older and damaged. I used Model Magic, a non-mess play dough-like substance that dries into a solid. I created the 3 snakes on the cover of her book and then colored them in with a dark purple sharpie marker. I glued the snakes to the book cover as an exact replica of Winnie’s book. I used a small ball of Styrofoam which I cut in half and then glues a picture of an eye ball on. I also used model magic to create the base around the eye and the jeweled locks on the book. To re-create the stitches that cover the book I used duck-tape: which I tore into small pieces and taped across the book. The final result was fabulous and very realistic. It was fun to carry around and cast spells with.

The flirty sister, who played Sarah Sanderson, wore her own corset that had lighter lace on it. She needed to make it look even more like the one Sarah Jessica Parker wears so she took a pair of her light pink lace tights, cut them up, and sewed them on as sleeves.  She already had a deep maroon floor length skirt so she got a piece of purple fabric which she tucked in and created a bustle to complete the skirt. She had her own black shoes which when paired together with her hair and makeup created a great replica of Sarah Sanderson! She even had her “lucky rat tail” which we created out of a hair elastic.

Together our three costumes were executed to perfection with extreme amounts of detail. We looked like the Sanderson Sisters without question and had so much fun creating the costumes! The reactions to our costumes were exactly as we desired! The minute we stepped onto the streets of New York people knew exactly who we were. Everyone loved our costumes and we impressed by the Book, Vacuum, and hair! We quoted the movie all night saying phrases and doing the voices. This film has become a 90’s cult classic over the years, so playing these witchy sisters was a blast! 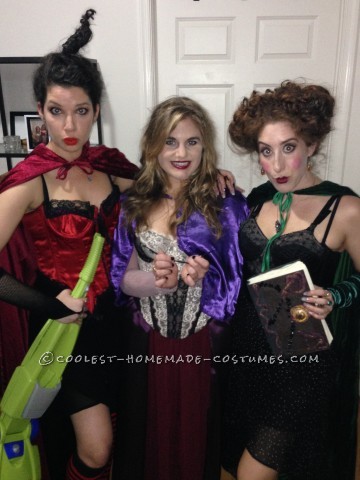 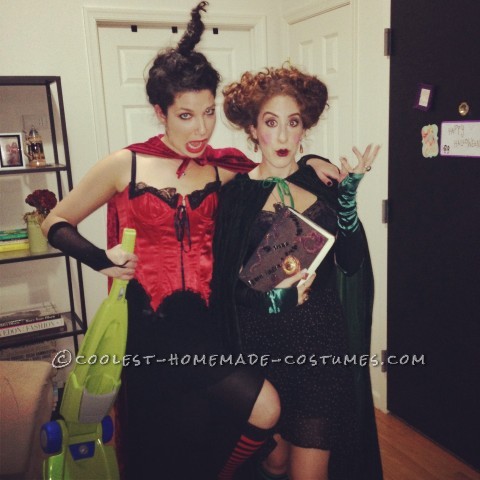 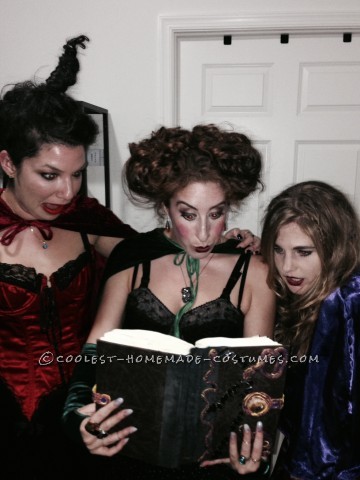 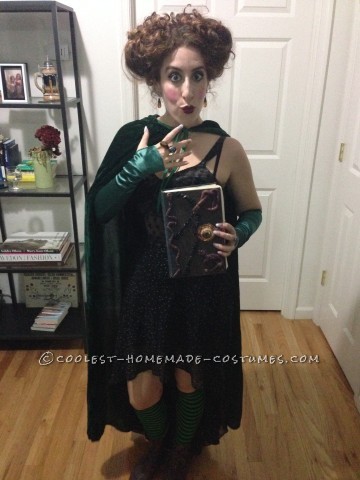 The Sanderson Sisters and the Master Group Costume from Hocus Pocus