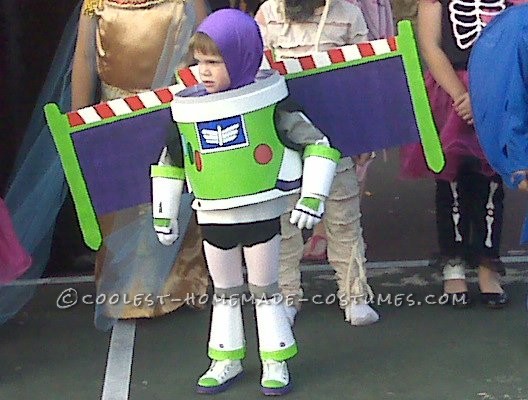 It all started with a white, plastic trash can, with removable lid. My three year old wanted to be Buzz Light year, from Toy Story. He was very specific, however, and did not want the soft, store bought kind. He wanted to BE Buzz.

So, I purchased a plain white, kitchen trash can, with the round dome lid. The can was used as the chest plate for the costume. I drew out the shape, and using a reciprocating saw, my husband cut it out. I then roughed it up with sandpaper, and applied two coats of Kilz primer (spray can kind). Again, I drew out the paint scheme with a pencil, then taped it off using painter’s tape. Then came the fun part. Using crafting paint, I painted the bodice. After applying several coats, allowing it to dry, and finishing with sealer, I thought it was safe to the remove the tape. Well, I was wrong. All of the paint peeled off!
So, it was back to the drawing board. This time, I added numerous coats of primer, and did without the tape. I just redrew the design, and free-handed it. Again, I added several coats, and numerous coats of sealer, and that did the trick!

For the wings, I used two sheets of foam board, one for each wing. I drew out the design, then painted them. This is where the lid came in. My husband cut all of the lid off, except the lip that locks onto the top of the can. He then attached the wings using a very small nut and bolt, to that lid ring, so that the wings were removable by simply lifting that lid ring over his head.

For the purple head cover, I just bought half a yard of purple spandex, and hot glued a piece inside of the can, which is what actually held the can up on his shoulders. Then I sewed a little cover with the remaining fabric that simply slipped on his head, like a ski cap. Under the can he wore a grey shirt up top, and white leggings, that I painted grey accents on, for the bottom. Also, between the bodice, and legs, Buzz has a black connector around his abs. For that, I used a large black ski cap that I cut out for his legs. For the wrist and ankle covers, I used Styrofoam cups, cut to fit, and then painted. I also bought plain white gloves and shoes, and painted them with the accents. And there you have it – Trash can Buzz!

This was one of my favorite costumes that I have made, even though it took me about two months. As far as the cost, the can was $12, the fabric was $4, the stockings, shoes, and gloves were about $5 (garage sales), and the primer and sealers were about $10, so in all about $30.00. However, I don’t care if it would have cost $100, and taken me a year to complete, my son was so happy, and proud of me! He said he really was Buzz Light year, so, mission absolutely accomplished! 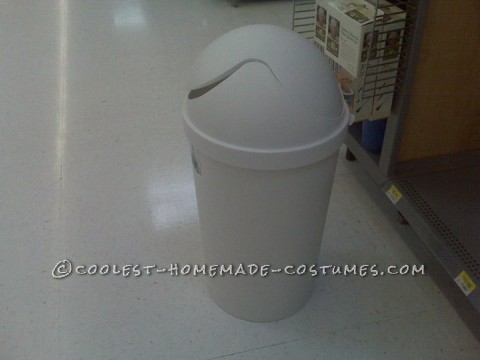