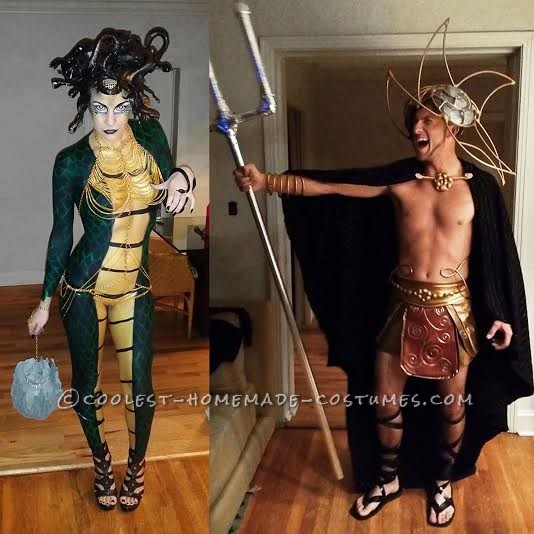 We searched and searched for ideas that nobody else has really done too often, I had watched the movie Immortals and said I wanted that helmet Poseidon wears. Then came the idea to create the entire costume and I searched whom his lover was, it ended up being Medusa.

My girlfriend searched for ideas on the head piece of Medusa, all ideas she found didn’t amount to the quality and detail we wanted. She started to create her own head piece with individual snakes and started wiring them together. She made the gold jewelry piece that went over her body as well to add a little flare to the costume. The final touch of her costume was to wear just bottoms and do a full body paint scheme like a snake. This went on from 5:30pm to 900pm.

The Poseidon costume took a lot of sewing, measuring and building to create. The helmet was the toughest part, I started molding the two shells on the head piece, and later started to wrap and cut copper tube to create all the lines and pieces of the helmet. It was very frustrating getting it all to hold together, but it turned out spectacular.

On Halloween night, we had plans to go downtown Orlando to enter the church street contest for a chance to win $3000. We got there a little while before the contest but every two steps we took, we got bombarded with people asking to take our photographs. One after another, non -top photos and by the time we made it to the stage, we had missed the costume contest and were so bummed seeing as how we got stopped by a few hundred people to take photos and most of them told we had the best costumes they had seen all night.