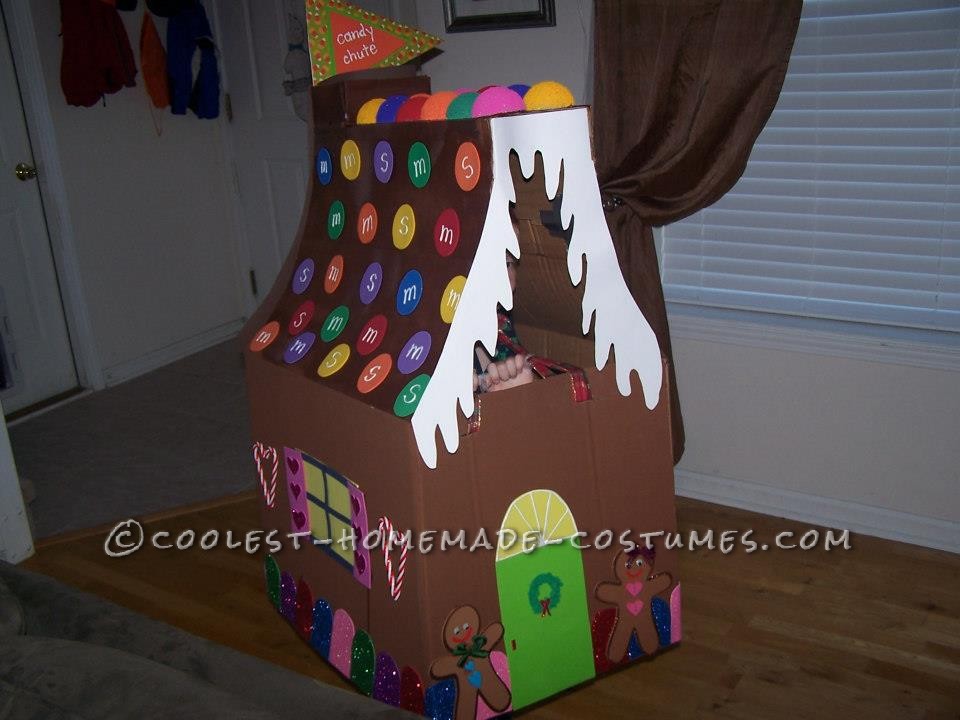 I made this costume for my son. One morning in September, over breakfast, he told me that he wanted to “be” a gingerbread house. I immediately had visions of what an adorable Halloween costume that would make, and hoped against all hopes that he wouldn’t change his mind and decide to be Darth Vader two days later.

It didn’t seem like it would be too hard, just a box with all kinds of adorable candy decorations! Well, making a roof for this house proved to be a bit challenging. The basic premise was that we’d just fold up two of the flaps, but of course, they were not long enough to come together to meet in a point, as I had envisioned. So, we cut the end flaps off the box, and glued each one on top of each of the side flaps. We had to use a lot of glue. And then had to wait a while to be good and sure it was dry. When we folded them toward each other, they created a perfect pointed roof, just as I’d imagined.

But then, my son said that he wanted a chimney so that people could just drop candy down it instead of carrying a bag to collect his treats. (He wants to be an inventor when he grows up, wish I could take credit for that idea!) Cool idea, but it complicated things. It was easy enough to make a chimney, but we needed to build it into the roof. So, we added a flat piece of cardboard in between the two roof sides. This wasn’t exactly the roof I was picturing, but then I decided I could camouflage the strange flatness at the top with some gumdrops. (Those were made with brightly painted Styrofoam balls, cut in half.)
The last piece of the puzzle was figuring out how to make the whole thing wearable. We cut two slits into both the front and back of the house, leaving enough space between them to fit our little guy’s shoulders. I threaded heavy Christmas ribbon through the slits so that he could slip the house over his head and wear it on his shoulders.

I framed the front of the house (where our son’s face would show) with white poster board cut to look like icing snow.

Finally, the fun part, the decorating! We painted the whole house with brown spray paint (to thoroughly cover any duct tape that was used to reinforce glue that wasn’t cooperating.) Then, we made gingerbread boys and girls, “candy” windows, skittles and M&Ms for the roof, and attached the gumdrops to the flat part of the roof. We also hot- glued candy cane ornaments on each side of the house.

To make sure his candy collecting idea would work, we rolled poster board into a cone shape, and inserted that inside the chimney (attached with staples and tape.) This created an invisible (to onlookers) funnel that we inserted into a backpack he wore inside the costume. We added a flag labeled “Candy Chute” on the chimney, and when he said “trick-or-treat,” he asked families to put candy in the chimney. It collected into his backpack, most of the time, anyway!

He couldn’t have been any cuter! The only downside was that it was too big to fit inside either of our vehicles, so we were not able to show if off outside the neighborhood. But we’ve got pictures and memories, and that’s what matters! 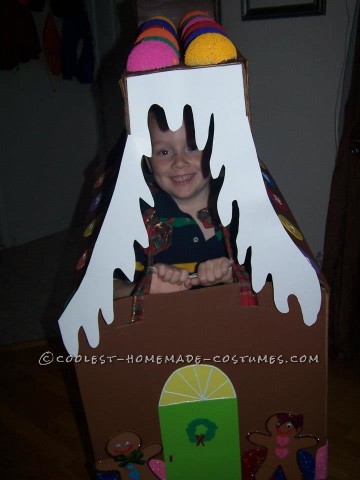 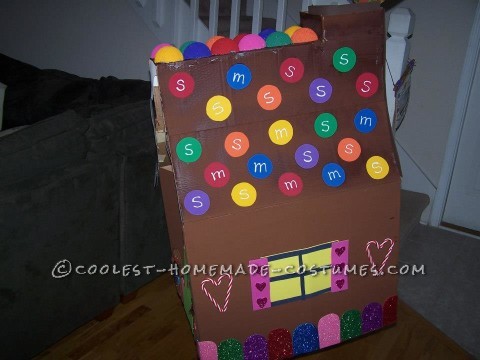