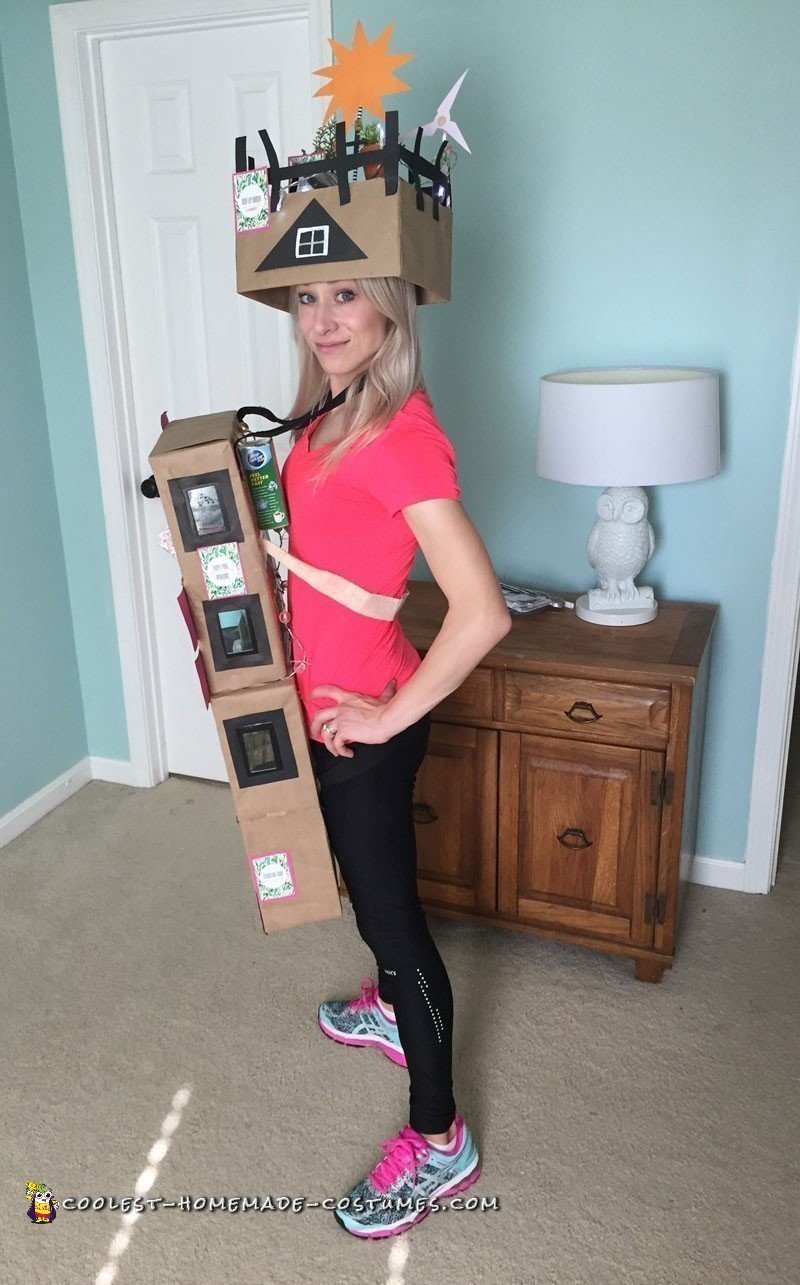 I think “Net Zero” homes are so cool! I also went to an open house a few weeks ago, and the builder (Sy Safi) told us about all the cool systems in his house, which not only make it super energy efficient, but also healthier to live in! I wanted to create something similar so I looked online for pictures of “net zero homes”, and found an infographic (a cartoon like photo). The infographic had labeled the main parts of a Net Zero home and that is what I tried to convey in my costume. I think it is so cool that people have built these homes that provide all the energy you need from solar panels, geothermal, wind, etc. Some people even get checks back from the utility company because their homes produce more energy than they can use! That’s what I’m talking about – a house that pays YOU to live in it! I had a really fun time making this costume and I really got to use my imagination : )

First I was going to use one big box, but then I didn’t like the way it was looking, and I wanted to be able to show the “interior” part of my rooms. So then I found 4 shoe boxes about the same size. I also used a small postal box for my “rooftop garden” hat. I decided to make the 4 shoeboxes into the garage/underground (for geothermal), kitchen, bathroom, and bedroom.
For the garage/underground box I just cut and hot glued a piece of cardboard in the middle to split it into two sections. I started off painting my boxes but then decided I liked the paper look better, so I mostly stuck with that. For the “geothermal” heating and cooling I took two wires with alligator clips, one was already red (for heat) and the other was back which I painted blue (for cool). I stapled them in a wavey pattern to mimic the infographic. For the garage portion, I borrowed one of my son’s cars, which I hot glued to stay in place. The Tesla battery wall was an old game cartridge from an electronic game, painted white, and I wrote “Tesla” on it. The ERV (Energy Recovery Ventilation) system was an empty advil box painted, and the solar water heater was an empty prescription bottle, painted as well. The electric car charger was a piece of a headphone and part of the cord.

For the “Kitchen” I used wood look paper for the floor, and colored paper for the walls/ceiling. The “appliances” were either empty medicine boxes or small boxes leftover from my wedding favors. I painted them and then added paper “fronts” with drawn on buttons and handles. The kitchen sink faucet was an “s” hook, the knobs were gold beads, and the drain was part of a button snap. The Table and chairs were made from wine corks and the top of a mason jar lid. I inserted lighting to look like recessed lighting in the kitchen by using a battery powered string light set. I also inserted a faux window by cutting out a rectangle with my exacto knife. I then inserted mini picture frames to look like triple pane windows (I also did this thoroughout the house).
For the Bathroom, I did the same thing as the kitchen for the sink, cabinets, and windows. For the shower, I made the head out of an old earphone and a plastic lego piece, connected to some wire. I used “tile” look paper for the shower as well. The toilet was made of an empty dental floss container and the lid to a lotion bottle. I just hot glued everything in place. I inserted more string lights in the bathroom, but added some beads on wire to give them a different look. The mirror was a mirror off of some compact makeup.
The bedroom bed was made of cardboard, and fabric. The bedrooom lights were string lights with pieces of plastic nebulizer tubing cut to look like lampshades. I then hot glued ribbon trim to the edges.

For the Rooftop garden hat I made a paper fence out of black paper, and a faux window as well. The “solar panels” were the clear plastic cover that you would buy batteries in. They were backed with black paper. I already had some leftover mini terra cotta pots from my son’s first birthday, so I just stuffed some floral foam and faux greenery in them and hot glued them to the hat.I made a compost sign out of brown paper and a toothpick. The wind turbine was made from paper, a paper straw and a brad. The sun and weather vane were just colored paper, glued to a paper straw.

The rainwater collection device on the side of the house is the bottom of a water bottle, with a spice shaker lid and black paper to look like a “grate” on top. I added some more nebulizer tubing to connect it to the house. The ICF’s, “spray foam”, and structural foam were all just packing foam I had around the house.

I covered the whole “house” in brown craft paper, and printed out mini signs to label the parts of the house.

To attach the house to my body I had 3 straps. The first strap was hot glued to the bedroom. For the second strap, I cut slits in the back of the kitchen box and tied a knot in some burlap ribbon. I pushed the knot into the slit making sure it was snug, and repeated the process on the other side. I did the same thing for the third strap as well.

This costume took me about 17 hours all together to complete. A lot of it was trial and error, but I made it work! It was actually a really fun project. I really got to use my imagination!