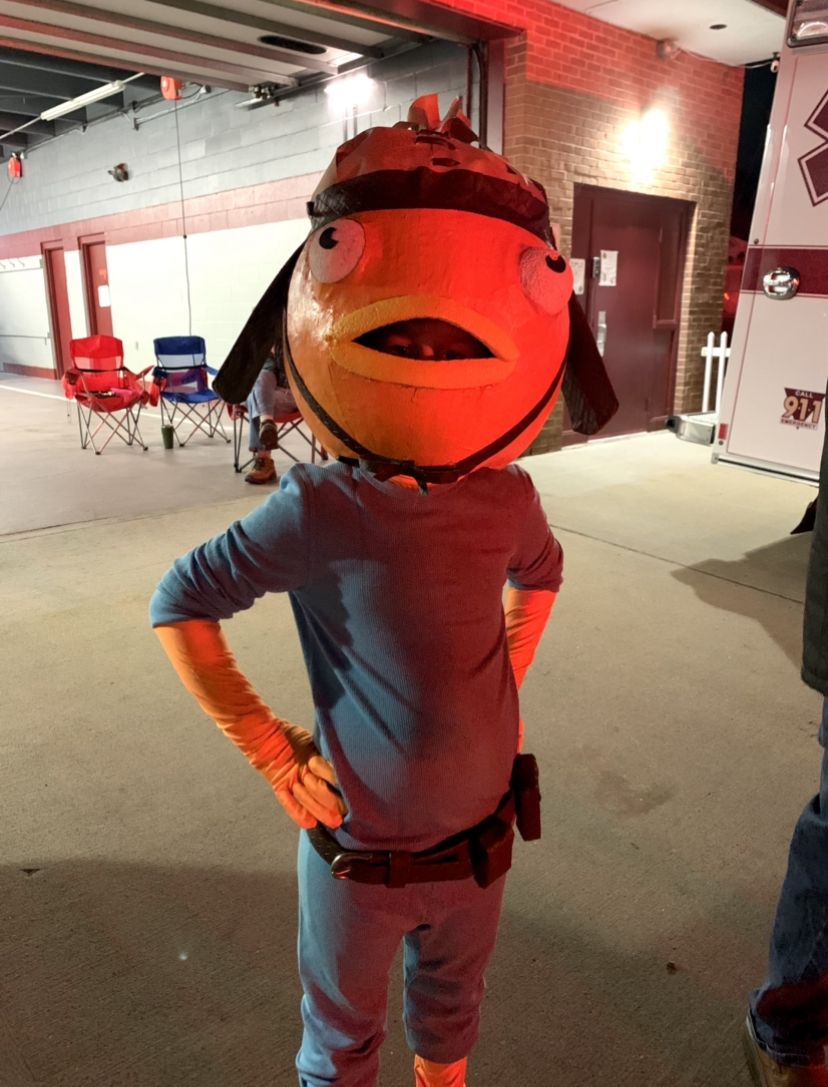 My son wanted a homemade Fishstick costume – his favorite character on Fortnite this year. I started looking for inspiration on Pinterest and other websites but soon discovered that there were not a lot of Fishstick costume ideas out there for how to make this costume. DIY costumes are a fun tradition that all three of my boys and I have enjoyed together for many years.

Last year our trick or treat fun unfortunately had to be canceled since I got Covid so we were not going to give up on making an awesome costume this year. My son and I went to the store and bought a punching bag balloon, some material to make Fishstick’s hat and belt.

This is always the best part of making a costume since my 10 year old son got to be involved we made great memories too. He learned how to paper mache. After he put on three layers and let them dry it was time to cut out the holes for the eyes and mouth. Once we did that I hot glued some old foam inside of the head to make it comfortable and then secured it with a chin strap made of elastic material. Then we painted the head orange.

Once that was dry I added the material for the hat on in strips, forming a circle in the top of his head. I used cardboard covered in material for the flaps of the hat that hang down. We put styrofoam balls through the eye holes and added some glue on the inside to make sure they were secure. I cut Fishsticks pupils from black card stock and glued them on.

The lips were the last and most challenging part. We just could not figure out what we could use that would be plump like Fishstick’s lips and also pliable enough to bend around the opening. Then my older son said why don’t you use a pool noodle? Genius!! We cut the pool noodle to fit the mouth then painted it yellow. I used a little bit of hot glue, letting it cool a little before applying the pool noodle so it wouldn’t melt.

We bought an orange spandex suit from eBay and the turquoise outfit from Walmart. My son was so excited to wear his Fishstick costume. Everywhere we went there were smiles and laughter. People loved it, especially Fortnite fans but others that had no idea what he was said oh wow look at the fish man lol!

He walked in our local parade and won a prize in the costume contest. He had a wonderful time bringing smiles to people and receiving such nice compliments. Fishstick has now become a decoration for his bedroom and with a few alterations will probably become his Valentine’s Day box for school this February.