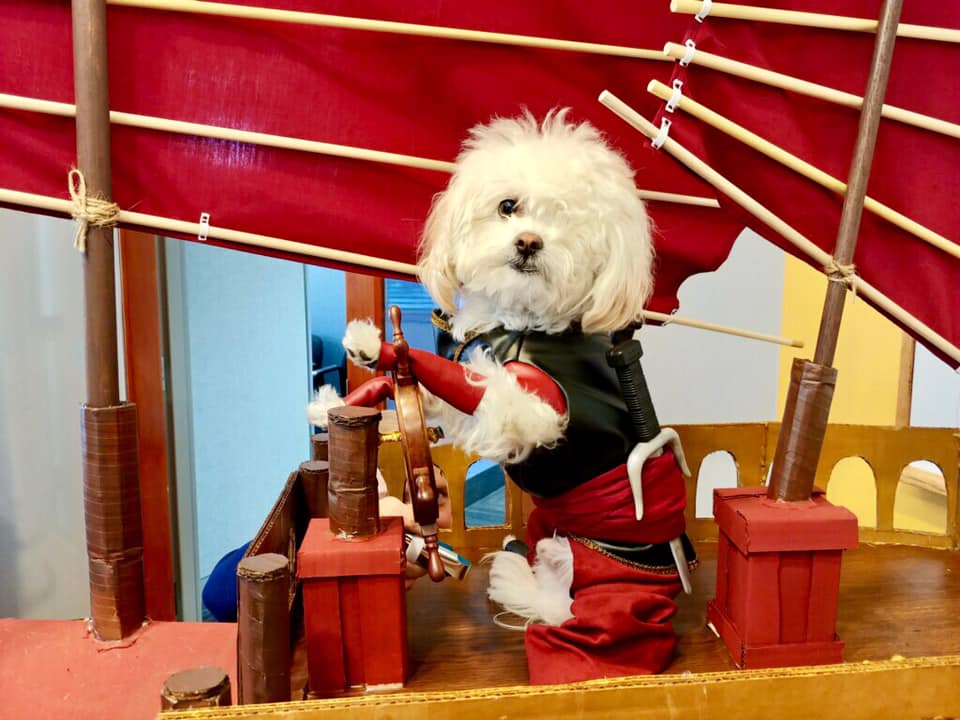 Here’s the story of how we created this Sinbad pirate dog costume for my dog Kalin.

This spring Kalin lost an eye to an infection from a cat scratch. It was heartbreaking to go through but also amazing to see how my family and community came together to support us through the healing process, raising money for his eye removal surgery, sharing prayers, and even donating paid time off so I could stay home with him while he recovered. He has healed well and is back to his happy and healthy self, minus his left eye.

After the surgery many friends and coworkers joked about him being a pirate dog, and though I was still mourning the loss of Kalin’s eye, soon the idea came to feel like a way to celebrate his healing and turn his new look into a creative asset. I started watching pirate movies and researching pirate ships, and quickly settled on an old favorite, Sinbad Legend of the Seven Seas, as inspiration.

I knew early on that if Kalin was going to be a pirate, I would need to build him a pirate ship to complete his look, and I loved the elegance of the Sinbad’s ship, the Chimera, and its triangular sails in the movie. They reminded me of dragon wings, and had more of a fairytale feel which fit with Kalin’s past costumes (prince, alicorn, fairy prince). Since Kalin is my best friend I thought it only fitting that I should be Sinbad’s best friend Proteus. I had a blue jacket that would be a good starting point for my costume, and got fabric to see myself a sash and belt as well as Kalin’s whole pirate dog costume (minus purchased ninja daggers) and the sails for the ship.

About a month before Halloween I got a ton of recycled cardboard from my work and started working on the ship. I had no idea what I was doing, having no knowledge of ships and very little knowledge about building as my previous crafting experience was mostly in fabric, but I found plans and pictures of the Chimera online and used an online scaling tool to find the dimensions of the boat I would need to build so that Kalin would be able to fit in his ship.

I researched other cardboard boats for inspiration and found two models of the Chimera online to give me ideas of how the ship was constructed (one made of popsicle sticks and one a digital model). No one seemed to have built a cardboard model of the Chimera, so I started working and mostly learned by trial and error as I went along. I glued many sheets of cardboard together to make a sturdy keel and wore my hands raw trying to saw through cardboard with a dull knife. When I bought a new box cutter it made a huge difference.

After building the base of the ship using nearly a gallon of glue to hold it together I got hot glue to attach strips of cardboard to approximate boards and was amazed how much easier the cardboard construction was with the faster drying hot glue. I should have used hot glue from the beginning instead of switching halfway through the project and saved myself a lot of time spent holding pieces together waiting for liquid glue to dry.

I found a tiny iron anchor and wooden steering wheel to make the ship more realistic and purchased lots of wooden dowels for the mast and sails. As Halloween got closer and the pirate dog costume project got more elaborate I worried I wouldn’t be able to complete the ship and our costumes in time and enlisted family and friends to help finish building and painting the ship.

After many late nights of work and one all nighter to finish the sails I finally started on the costumes the morning of my work Halloween costume contest. Everything had taken much longer than I thought it would and I was desperate to finish the whole project for the contest. I got permission to come in to work after lunch so I could finish the costumes.

Everyone at work was really supportive and excited to see the pirate dog costume project. I had my pants, boots, T-shirt and jacket and only needed to sew a simple sash and belt to complete Proteus’ look, but I was sewing Kalin’s pirate dog costume from scratch and it was my first time working with fake leather and suede and sewing for a dog.

I used one of his Sunday suits as a pattern base (Kalin has a large wardrobe) and scraps from the sail fabric to test and fine tune the pattern. The extra strong thread kept getting caught in the sewing machine even when I rethreaded it and tried different needles, and by the time I finished Kalin’s costume I had to rush to shower and get us to work for the costume contest.

I haven’t even tried the whole pirate dog costume on Kalin (only the individual pieces) or hung the sails from the masts (I made the masts detachable so I could fit the ship in my van, the dowels simply slid into cardboard tubes that held them upright on the ship). I brought lots of twine with the sail fabric and supports, shoved our costumes and a few props in a bag, and my roommate helped me carry the 6 foot long ship out to my car.

When we finally arrived at my work my coworkers were absolutely stunned and thrilled with the project. I had lots of help carrying the ship in, attaching the sails, and putting Kalin’s ocean themed toys out as props. Everyone kept saying how big and amazing and detailed the ship was even before we got into costume, and once we got our costumes on and I put Kalin on his pirate ship I knew our project was a success. My coworkers were taking pictures of our costumes and Kalin on the ship for hours.

Even though we arrived partway through the contest and some people voted before they even saw our costumes we still got second place in the contest (only a vote or two away from first, it was a very close contest). Kalin looked adorable on his ship and his one missing eye only made him more piratical. Our costumes and ship were close to the movie inspiration, and I was quite happy with how everything turned out. We even got asked to leave the ship and our costumes at work so more people could see them the next week, and my coworkers said I should enter online costume contests, which led me here.

The best part of this pirate dog costume project was how many people came together to help me finish it when I started running out of time. I am a very quiet person and it is an amazing feeling to see how big my support network is and see it in action, how many people love and care about me and my dog and want to help when we are overwhelmed. Seeing Kalin on the deck of his ship looking amazing with his missing eye perfectly in keeping with the pirate theme was also emotionally healing after the trauma of losing his eye. He doesn’t seem to miss it at all, but I needed this project to help me finish finding peace with the things we have been through together this year.

The funniest part was the way Kalin would throw his toys around while I was working on the project and even cuddle against me (or anyone helping) while I worked, begging for attention and making me laugh with his antics.

The hardest part of this project was running out of spray paint and having to paint the entire top half of the ship by hand the night before the costume contest. Also how the sewing machine hated suede and extra strong thread.

Bonus hilarity: the look on people’s faces when they see how big the ship is, absolutely stunned. Kalin is a small dog, only 7-8 pounds, and even though I said I was making the ship for him (and I tried to make it as proportional as a could though the captains cabin is probably twice as tall as it should be so he can actually fit inside), I don’t think anyone expected the 6’ long 8’ tall monstrosity I showed up with at the contest. The thing I heard most was “it’s so big” follows by the sound of camera phones.

Thanks for considering my submission and Happy Halloween!

(You can see lots more pictures here on Facebook…)