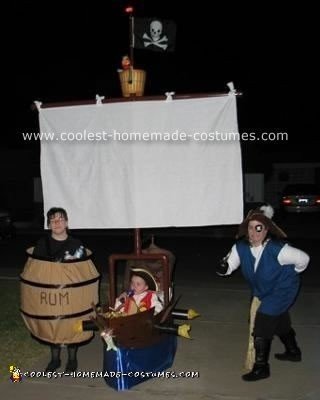 For Halloween 2006, we went with a pirate theme. Our two sons went as pirates, as did I, and their aunt went as a keg of rum.

The boys’ costumes were simple. We used black pants we already had for both. The Captain’s vest was made from inexpensive red fabric. I hot-glued yellow felt buttons on both sides of the opening of the vest. We used a white long-sleeved shirt underneath, a simple blue sash, and a pirate hat my husband bought in 1979.

The matey’s costume was made from a red bandanna around his head, a white shirt, and I made the vest out of black & white striped fabric. I didn’t even hem the edges so it would look more tattered.

My costume was made using the same inexpensive blue fabric as the Captain’s sash for my vest, a white shirt I already owned, black pants, and the boot covers were made from black fake leather. I bought a cheap “pirate set” with eye patch and hook.

This was tricky. We used 3 hula-hoops (2 were smaller than the third). We used light brown fabric and sewed it into a large tube-shaped design. We placed one of the smaller hula-hoops around the bottom, wrapped the bottom edge of the fabric around the hoop and hot glued it into place. We then took the largest hoop, placed it into the tube from the top, and I whip-stitched it onto the fabric using the same colored thread. The top hoop was the other smaller sized one that we placed at the top of the fabric, wrapped around the hoop, and hot glued it on.

We used black ribbon for the straps by hot gluing them together in the front and a little farther apart in the back so my sister could get in the keg easily.

This was the brainchild of my husband. It was labor intensive but well worth it. He built the ship around our sons’ double-stroller using steel ladder wire. He hung it from the frame of the stroller forming the basic skeleton of the ship. He attached poster board, cut to fit the ship’s hull and deck, and added a PVC pipe frame to support the mast. 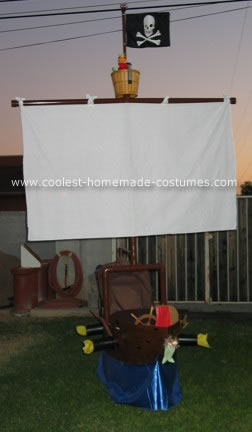 He spray painted the entire ship brown and did the figure artwork (knot holes, board texture) on the ship’s sides. He cut 3″ PVC pipe to make the cannons and hung them off the ship using wire and cardboard. He put a bicycle LED flasher in the tube, on the blinking setting, inside the tubes with yellow tissue paper secured at the end to replicate firing cannons.

Detail work was done after painting was done – attached crow’s nest, put a parrot puppet in the basket, attached a Jolly Roger flag at the top, and hung a simple white bed sheet as the sail.

The boys’ grandfather made a ship’s wheel out of wood he already had and we attached it to the front of the stroller.

We wrapped blue satin fabric around the bottom of the ship to hide the stroller wheels. It shimmered just like water. We attached it by hot gluing the fabric to the poster board on the ship.

We made a treasure chest out of cardboard and set it on the bough filled with golden wrapped chocolates to hand out (as booty).

For a finishing touch, we bought a $1 Barbie-a-like doll and twist tied her to the front of the ship. 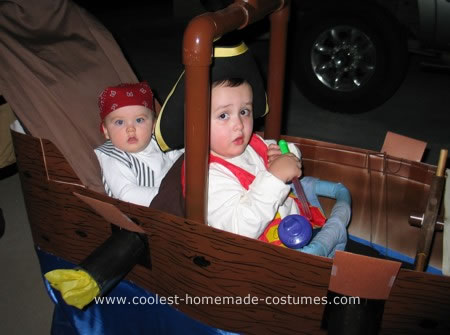