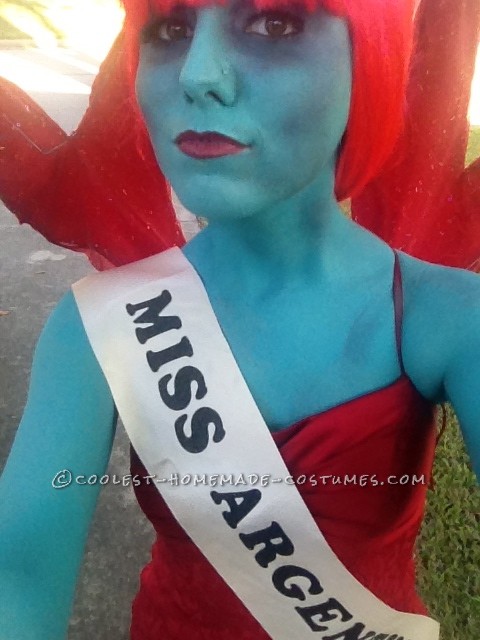 This darling Dead Receptionist Halloween costume from Beetlejuice took time and planning but it was oh so worth it! I went to a concert on Halloween and I felt like a celebrity… so many people wanted a picture of me! As I walked through the crowd, I kept hearing people saying “the girl from Beetlejuice!”… it was a blast.

Making the costume was just as fun. My mom helped me and we had such a good time. I think the best part was painting my body. We did so many layers and used small brush strokes for a super even outcome, and everyone was astonished that I had body paint on. We had a pretty interesting time with the flames that she’s wearing in the movie, and by interesting I mean difficult, but in the end it all came together really well. We actually produced a great amount of this costume on Halloween day, and it did turn out great, but next year, I’m going to really begin my work a lot sooner!!! So here’s how we did it, step by step.

So this was probably the most difficult part. We found an old pair of costume bat wings that were made of shaped wire attached to a block of wood. We removed the black fabric and straightened out the wire. We then reshaped the wire into the shape of fire (two flames, one on each side… sort of flame wings). We bought sparkly red tulle and silky red fabric from the fabric store. We then placed the shaped fire, one side at a time, over a piece of poster board and outlined the shape of each flame. We then cut out the shape of each flame.

We then used the poster board cut-outs to cut each piece of fabric (so we cut the tulle and silky fabric for each flame shape). We then basically made a pillow-case like covering for each flame, using the tulle for the front of the flame, and the red silky fabric for the back of the flame. We had to make sure that the sparkles and the silky part of the fabric, respectively, were on the inside when we sewed the “flame-case”, so that when we flipped it inside out so the seams weren’t showing, the sparkles would be on the front of the flame, and the silk would be on the back.

I got a big giant ribbon from a fabric store and used iron on letters to create the “Miss Argentina” sash. I bought the red dress. I wore some hose and flats that I already had.

Ok, so in the film, she’s wearing a bright red wig in an up-do. I planned on finding something similar, but then I opted to try and dye a wig that my mom has (we thought it was real hair). This didn’t work out so well, I’m not sure if it was because the wig was too dark of a blonde, or if it was synthetic and just wouldn’t take the dye. In any case, I ended up buying a bright neon pink wig at the costume shop Halloween day. I put it up in a clip and it worked like a charm.

This was my favorite part! I went out to a good costume shop and bought a teal water-based body paint. I covered the upper part of my body with it. We did several layers with a large makeup brush. We used small strokes to avoid streaking. We then went back with a blush brush and applied purple eye shadow to create a bruised look and to add some shadows. For the slit wrists, we applied a line of light purple, then layered over that with a line of dark purple, then over that with a line of deep red lip stain. We kind of blended it with the purple eye shadow and blush brush. For the eye makeup, I used a combination of light and dark purples, and a little black. I applied black eyeliner and fake eyelashes. I basically used dark purple and black as blush to accent my cheek bones. 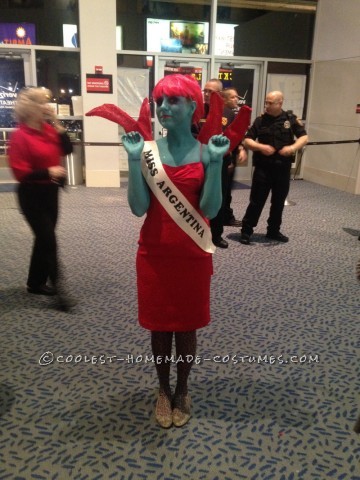 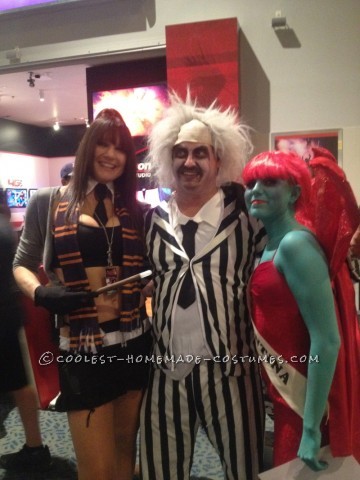