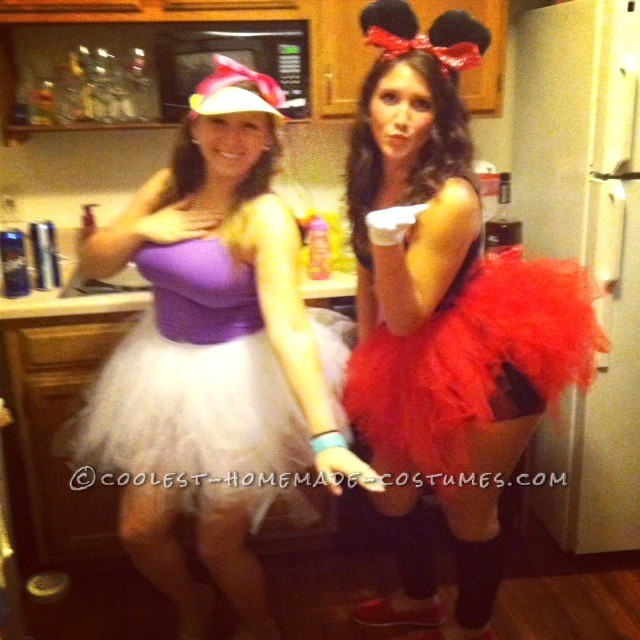 his costume was totally last minute. My other costumes for the weekend were weird or scary so I wanted at least one costume to be cute! My friend, Kailey and I brainstormed for days but really struggled since it was the week of halloween and we really wanted something original. I know minnie mouse has been done many times, especially with mickey mouse. But I rarely see it paired with her pal Daisy. It was perfect for me because my friend had a red tutu from last halloween that she made so I was able to borrow that. But if you aren’t this lucky tutu’s are not difficult to make with some tulle and ribbon from your local fabric store.

Since I already had the tutu I focused on the hardest part, the ears. It was too last minute to find a cute head piece to buy so I was forced to make it. It turned out to be very simple even though I am not the craftiest person. I purchased some black felt and thick (width wise) ribbon from the fabric store. I did not have a plain black head band so I also purchased one of those from Claire’s. For the ears I cut two circles out of cardboard.. I really just estimated the size in my head. Then I cut two holes out of the black felt that were a little larger than the card board circles. I glued some cotton pads to the cardboard to add some fluffiness Then glued the overlapping felt over the cardboard. Last I cut two more felt circles to the other side of the cardboard. I used fake nail glue by the way… super unprepared. But it worked! Then I just made a biggggg bow out of my ribbon, wrapped it around the headband and then glued that too. It came out perfect.

Finishing touches to this were my white gloves I found for $5 at a costume store, black leg warmers, and these cute $7 red shoes from WalMart. I wore fake eye lashes to make my eyes pop and kept the rest of the make up simple besides the red lip stick. I found these big flashy heart earrings I forgot I had that really reminded me of Disney/ Minnie for some reason. The rest of the outfit was a plain black tank top and plain black spandex shorts. I loved this costume because it was so cute and comfortable at the same time. Especially the shoes!

Daisy’s costume was similar; consisting of a white tutu, purple tank top and the accessories to match. In pictures we looked at daisy typically wore a purple top with a pink bow in her hair and pink shoes. Kailey happened to have all of these things and even the teal bracelet. Her costume ended up being super cheap! The only other thing she purchased was the yellow visor from the craft store. The pair of Minnie and Daisy won everyone’s hearts.