At 8:30 pm the night before Halloween, I decided I wanted to wear a costume to work the next morning. I had just gotten home from the gym to find that my husband wasn’t at home. I called him and discovered that he was across the street from Wal-mart. When he asked if I needed anything, I replied, “Wellllll while you’re out….” I had him purchase crazy, fluttery fake eyelashes and glue (that was fun because he didn’t even know where in the store to find them), white shoes, yellow spray paint, white winter gloves, red polka-dot ribbon, and a pair of Mickey Mouse ears from the kids’ party section. Thankfully, I already had a red polka-dot dress, black panty hose, and lots of black eyeliner.

First, I spray painted the white canvas shoes bright yellow. With all the windows open and a fan blowing on them, the shoes surprisingly dried in no time! They looked amazing! So many people asked where I managed to find yellow shoes. When I told them, “I didn’t. I spray painted white shoes,” they were floored. They looked as if I had bought them that way! At the shoes only cost me $8 including the spray paint. Next, I tied the red ribbon around the Mickey Mouse ears to turn them into Minnie Mouse ears.

The hardest and most time-consuming part was doing Minnie’s makeup. I woke up extra early for work and still ended up being late because I wanted the makeup to look perfect. I used lots of blush to make my cheeks look more cartoon cheeks, drew cat eyes along my lashes with eyeliner, applied the fake eyelashes and copious amounts of mascara, covered my lips with red lipstick, and then drew a black circle on the tip of my nose with eyeliner. It was hard to remember not to touch my face during the day, especially with white gloves on! I received tons of compliments! Some people didn’t even recognize me!

The best part was meeting with contractors  who had just completed a job that I had to inspect. They were gleefully surprised to have a Disney character inspect their work! 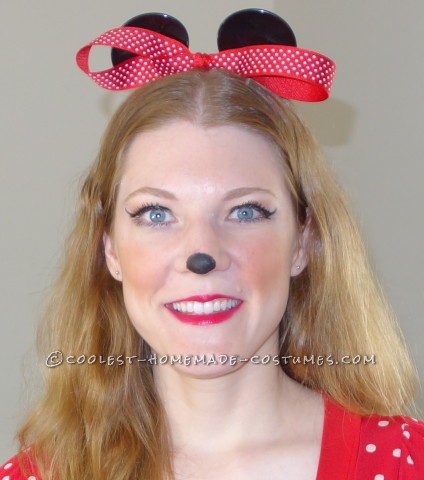 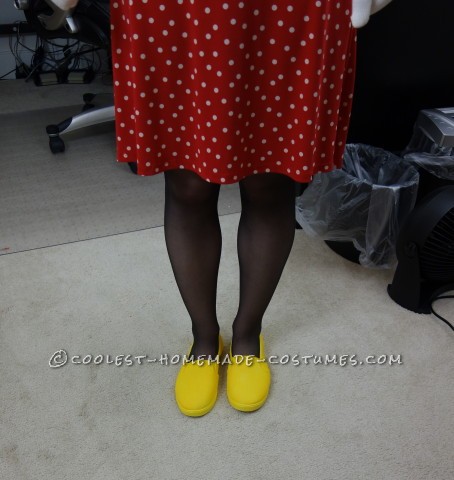