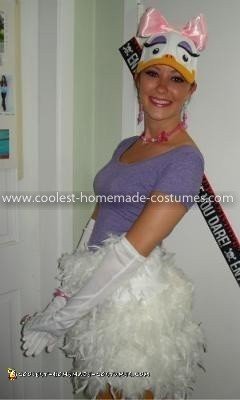 This year, I decided to create a Daisy Duck Costume for Halloween!

The felt was 20 cents per piece and I only used a little bit from each piece. I made the bow out of pink ribbon I found at the craft store for under 3 dollars. I attached everything with superglue but I’m sure hot glue or even plain Elmer’s would have worked fine.

The Skirt: I bought a white skirt from the store. I ended up buying a nicer quality one that I can wear again but you can find cheap ones from stores like Forever 21 or Charlotte Russe for under 10 dollars (or search a local thrift store!). I ordered two 6-ft long feather boas from Amazon for about 4 dollars each (make sure you do this because I looked at the craft store first and they were $9 for 3-ft ones!).

Then, I tied them together and attached them on each end with safety pins… would have pinned more but I didn’t want to ruin my skirt and 2 worked out fine (although sometimes the boa bunched up or down… notice in the third picture). I ended up taking off the boa after the pictures because it shed a lot. The Daisy Duck costume still looked great even without it.

Jewelry: I bought the cocktail ring and necklace but made the bracelets and earrings using pink and purple heart beads and wire that I found at the craft store.

Shoes: I couldn’t find baby pink shoes anywhere that were in my price range so I decided to just cover the black heels that I already had in pink duct tape. First, I covered them in masking tape since its less sticky than duct tape. Then, I used pink polka-dot “duck” tape that was from Michael’s. I was going to get plain pink but the plain pink they had was hot pick so I figured the light pink with polka dots would work better.

It was a little tricky aligning the dots but they turned out great! I still haven’t removed it so I’m not sure how well it will remove. But, they were inexpensive heels so I’m not too worried about it.

I bought the yellow tights. I was going to just buy white and dye them with Rit dye since I couldn’t find yellow anywhere. However, then I found them at Forever 21 for just $4.50. It was great because the white tights + dye would have cost me around 10 dollars. I also bought the white gloves for $10 and I borrowed the shirt from a friend.

For the makeup, I used purple face-paint on my lids. I wanted it bold, but the purple wasn’t really the right shade so I dabbed the right shade of purple eyeshadow on top. Then I added fake eyelashes to make my eyes long like daisy’s. I used pink lipstick.

I had a blast making this Daisy Duck costume and think it turned out great!

Here are some more cool Donald and Daisy Duck costumes…