As a child, I always loved Curious George. As I got older, the love I had for the beloved little monkey didn’t change, which is what inspired this Woman in the Yellow Hat costume. I originally was thinking about being Curious George but felt like the sexy animal craze has just been too strong over the past few years. I then got a brilliant idea- I could be the (wo)man in the yellow hat! I took the idea and ran with it.

I went to the thrift store in search of a yellow button-up shirt and pants. Unfortunately, I could not find anything yellow, so instead, I bought a white button-up and white skirt and dyed them yellow. I also bought some white fabric and dyed that the same yellow. I took an old hat that I had laying around and painted it a similar yellow with a black strip. I made the tie with the fabric I bought by tracing one of my boyfriend’s ties, and then I added black dots to it. I triple layered the fabric of the tie to make it as thick as a normal tie and sewed it. The final step was adding the black belt and brown boots. Tah Da!

Overall, it was a fairly easy costume to construct. The hardest part was the dyeing. When I was out however, the hardest part was trying to stop people from trying to take George. I was very protective over him. I got a lot of compliments on the costume, especially from teachers and parents of young children. I think it elicited a feeling of nostalgia in a lot of people which I really liked. I liked being able to put a smile on people’s faces. As a whole, I loved this costume and its nostalgic feel, and think it was well liked by others too. 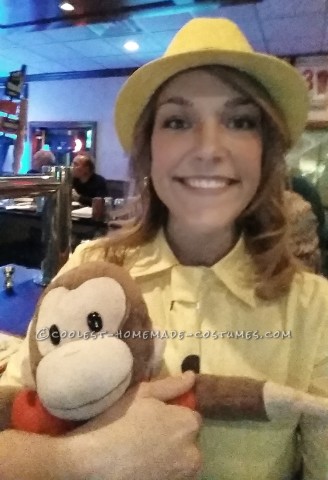