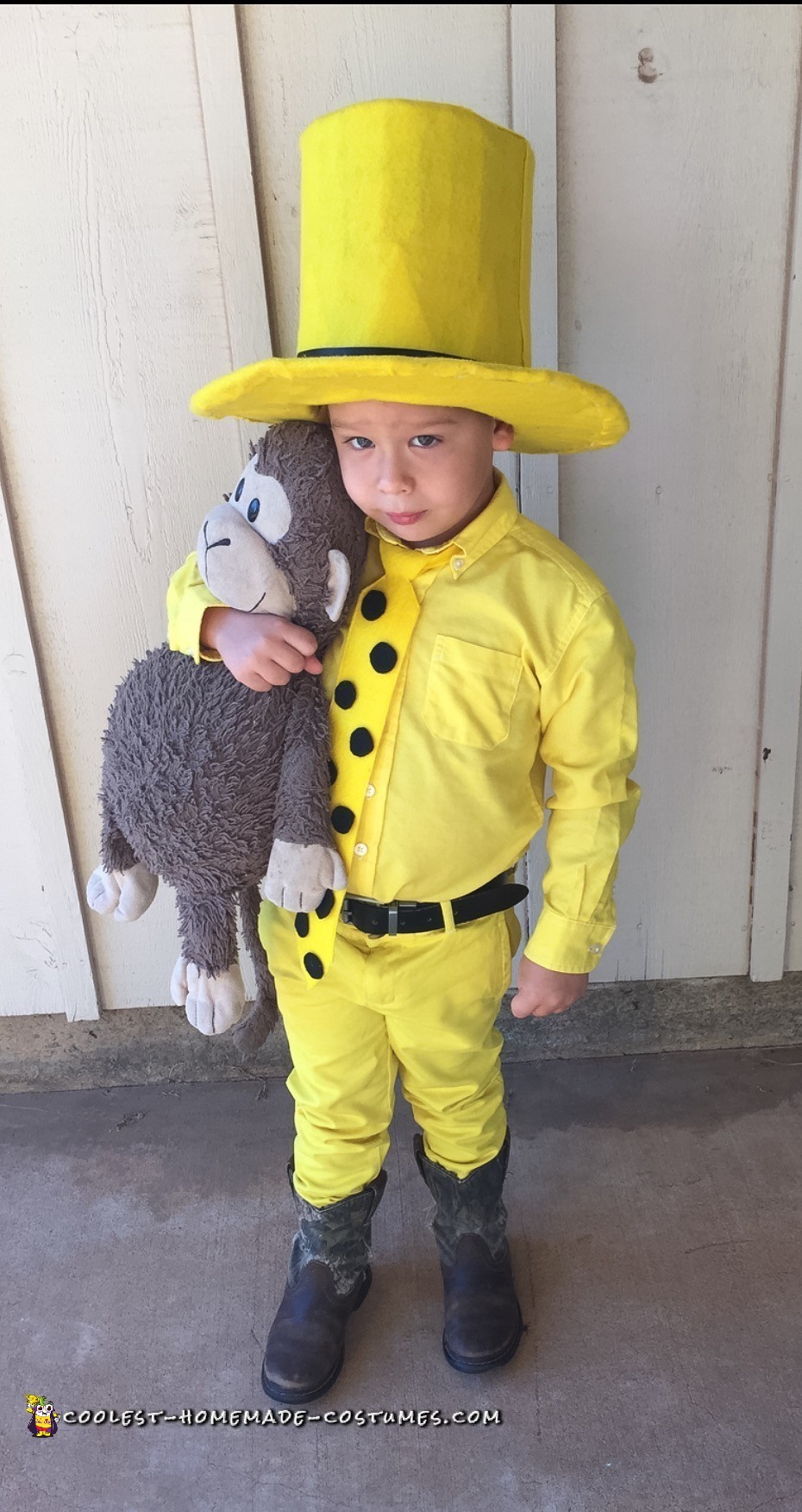 This is my 3 year old son, Kyler. The monkey pictures is George. Kyler got George as a gift when he was just a few months old. Ever since Kyler was old enough to crawl, George has went literally EVERYWHERE with him, even every trip to the bathroom (can you tell how much love George has received over the last few years and how much “character” he has 😉).

Did I mention Curious George is also his favorite show? Like seriously, I could write a script for every single episode and all the movies that have been released. When Kyler told me he wanted to be the man with the yellow hat for Halloween I was soooo excited!! It was simply perfect for him and I couldn’t wait to design his costume!

We dyed a white button up shirt and white pants with RIT dye. I cut a cardboard box up in to make a hat (directions follow) I made the tie out of felt (directions follow) and added a belt and his favorite boots. I can’t believe how perfectly this costume fits him! We attended an annual church Halloween party last night and everyone else agreed it was just perfect for him and absolutely loved it.

To make the hat, I started by measuring his head. I then drew a circle on a piece of cardboard the same measurement. Then I thumb-tacked a soft ruler directly in the middle of the circle drawn on the cardboard. I then added 3 inches to the original head measurement for the brim of the hat. Slowly making my way around the first circle, I drew the second circle 3 inches larger all the way around using the ruler to make dots closely together and then connecting them. I then cut the larger circle out from the cardboard. I then cut out the innermost circle DON’T THROW THE CIRCLE YOU JUST CUT OUT AWAY!

Next, cut out a rectangle 8in. X the the head measurement and cut it out. Hot glue the ends of the rectangle together to create a cylinder, then hot glue the cylinder into the center of your hats brim you created. Then simply hot glue the circle you cut out of the brim to the top of the cylinder to enclose the top. Then you just cover in yellow felt and add black ribbon around the base of the cylinder. I taped really well before covering in felt for added stability.

For the tie, I just measured from his collar to his waistband and doubled the number. From yellow felt, I cut a strip 2in. X the number I got from the measurement. Fold it in half to make it a little sturdier, and cut little triangles about an inch from the collar to make it look more like a tie. Then cut the end (by the waist) to a point. I then sewed around it, being sure to leave a space to put another thin strip of felt through that will go around the neck. I just fastened the thin strip that goes around the neck with a safety pin but you could see on a button if you wanted. Lastly, I just cut a bunch of little circles from black felt and hot glued them to the tie.

And that was it, how I made what will probably be my favorite costume he will ever pick out! 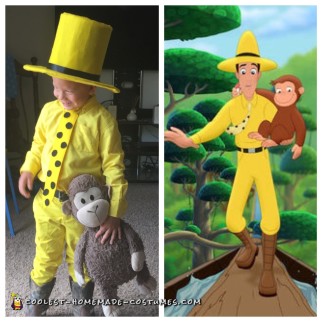