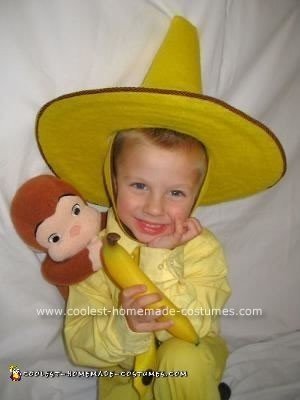 Two years ago when the Curious George movie came out, I immediately thought of this idea. I love to have my kids wear costumes that are handmade (of course!) and are something that everyone (young or old) will know what they are. This is the only character costume I’ve ever done, but I knew even my kid’s great-grandparents would know who he was.

I had so much fun making this man in the yellow hat from Curious George outfit. From searching for the perfect clothing & boots, dying the clothing yellow, making the tall yellow hat (actually made two), sewing on George, making the brown messenger treat bag, and adding the finishing touches (like the banana).

My son got so much great compliments and even won a couple of costume contests. He stood out by a mile (I guess that will happen when you’re wearing a two foot tall yellow hat and have a monkey on your back).

How I made it:
The clothing was purchased from Once Upon A Child and Savers. Then I bought yellow Rit Dye and dyed the shirt and pants yellow.

The hat was made from a straw hat I bought at the craft store. I then cut out the middle piece and pushed a Styrofoam cone through the middle. I used a razor blade to carve the cone into the shape I needed. I then covered the entire thing with yellow felt (bought by the bolt). I used brown cording to cover up the edges of the hat where the seams were. I made a yellow and brown strap with a Velcro closure to insure that the hat stayed on.

The tie was made with yellow and brown felt and was then secured to a piece of elastic that went around his neck.

The messenger bag was made with brown felt and brown grosgrain ribbon. I also made brown mittens out of felt to keep his hands warm (we live in MN). I bought brown boots from Savers and a brown belt from Once Upon A Child. I added a plastic banana in his pocket that I purchased at a craft store.

The final and most important element was adding George. We used a stuffed George that my son had and I sewed his hands and feet to his shirt. It stayed securely in place and George was unharmed after being removed.

Fantastic Homemade Costume: The Man in the Yellow Hat