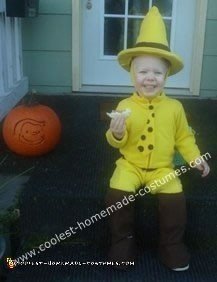 For this DIY “The Man With the Yellow Hat” from Curious George Halloween costume, I got a pattern for a race car jumpsuit and made it with yellow fleece. The tie is also made from fleece, fastens with velcro, and the spots are made with a Sharpie marker. The belt was one my son already had.

The hat was a foam cowboy hat. I made a cone hat out of the yellow fleece and stuffed it. I then slid it over the hat and hand sewed it to the hat. Then I covered the hat brim with the yellow fleece and machine sewed it. The chin strap is attached with velcro on both sides so it’s really easy to get off. The hat band is sewed together at the back but is not attached to the hat. It stays put so I didn’t figure it was worth the extra effort. I did make a brown fleece belt but decided to use the leather one instead.

I even found a metal pail that has Curious George painted on it. Inside was a stuffed ‘jumpy squirrel.’ Of course, The Man must have his monkey by his side, so ‘little brother’ played that part! 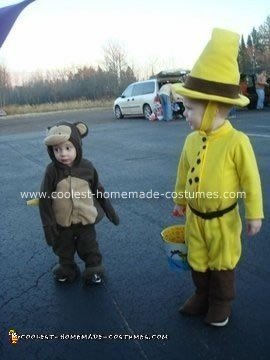