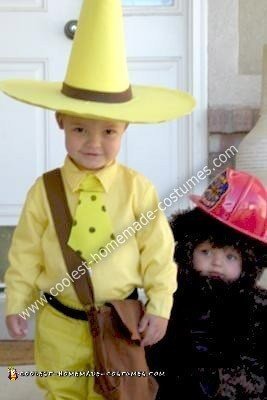 For Curious George, we took the red vest off the original costume and added the Fireman hat, since he is always wearing various uniforms while he’s getting into trouble!

For The Man in The Yellow Hat, we found white pants and a shirt and dyed them yellow. The hat was tough; we originally tried to repurpose a witch’s hat but ended up constructing it from posterboard. We cut one circle for the brim, and a quarter circle for the top, folding it over to create the square top. We then covered it with yellow felt, and added the brown felt hatband.

He wore brown shoes, and we made felt “boot tops” that attached with Velcro to make it look like he had tall boots on. We found the messenger bag at a thrift store and added a black belt. The tie is felt with an elastic band, and we drew the black dots on with magic marker.

Fantastic Homemade Costume: The Man in the Yellow Hat