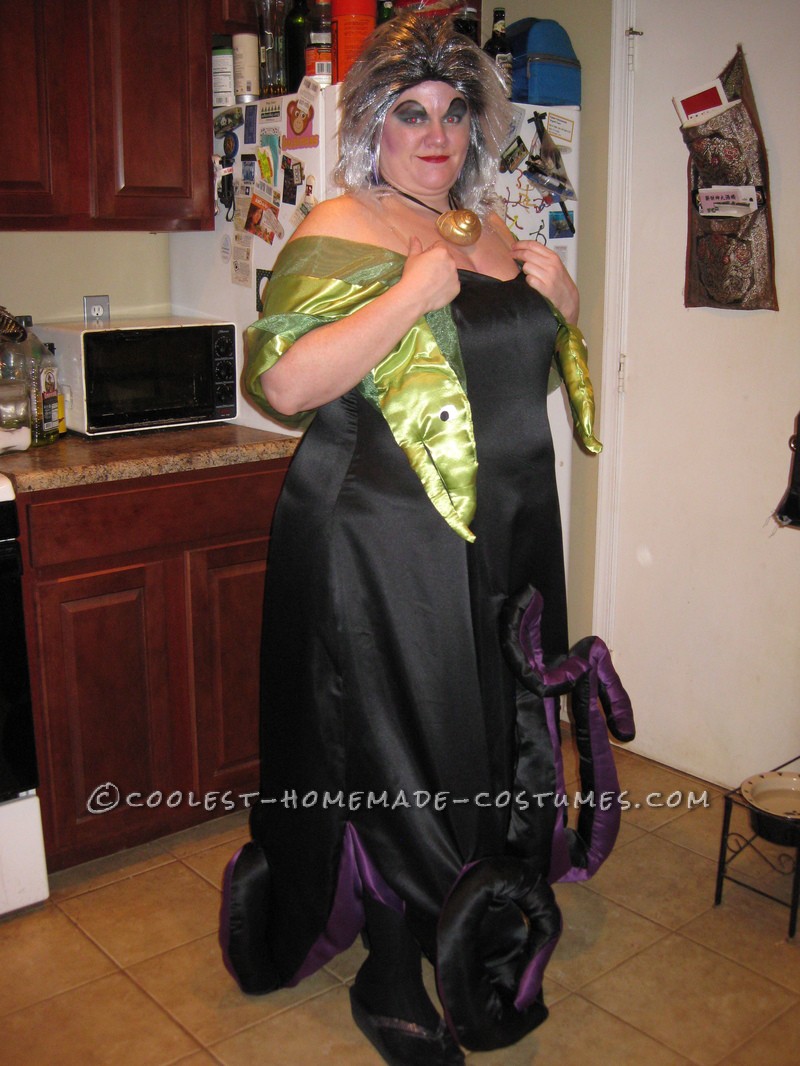 I wanted to make an Ursula Halloween costume that went nearly to the floor so that very little of my legs were showing. I found the perfect start to the costume with a formal dress pattern (Simplicity 2400) that had a sweetheart neckline and was fitted through the waist. When I laid out the pattern pieces, instead of cutting the bottom edge off straight, I extended the length into curvy tentacles.

The whole top layer of the dress was made in shiny black polyester satin, and the underside of the tentacles was made in the same weight satin, but in purple. I cut the purple piece of the tentacles a few inches narrower so that each tentacle would be about 3/5 black and 2/5 purple (more black than purple). I sewed the dress up basically following the pattern instructions down to just below my knees, where I’d changed the dress into tentacles instead. I stuffed each tentacle with regular stuffing and 16g plastic coated wire (the tips were twisted into a small round loop to prevent them from poking out of the satin).

I bent each tentacle into a different position that looked “flowy” and tacked each one with a single knot of black heavy-duty thread. If you use more stuffing to make the tentacles very stiff, it would be a lot heavier, but you could probably skip out of using the wire. I had the front-most pair of tentacles tacked a bit higher than the rest to make it easier to walk in. Some of the ones in the back were long enough that they brushed the floor, but not so long that anyone stepped on me all night. The bottom of the dress ended up weighing a good bit, so I attached clear bra straps to keep from having a wardrobe malfunction.

The wig was store-bought and then cut into a shorter style. I found a big, flat sea snail shell for the necklace, painted it gold, hot-glued 2 big rings on the back, and strung it on black cord. The earrings were spiral seashells that came drilled with little loops on top that I painted lavender purple and attached fishook ear wires to.

Flotsam jetsam were made of green shiny polyester satin with a darker green organza ruffle for their fins. I tacked them together a few inches up from the ends of their tails so I could wear them draped over my shoulders. 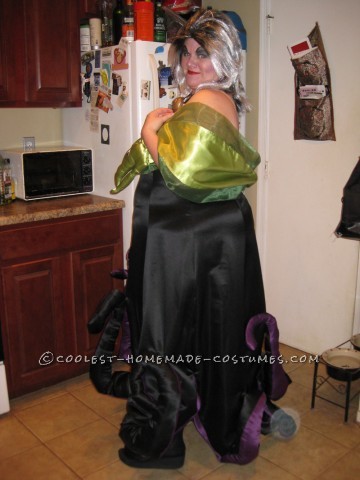