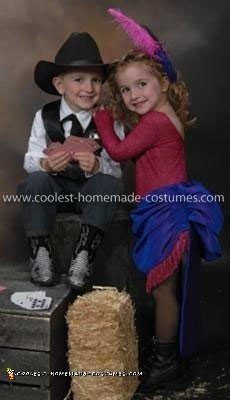 I wanted to my kids Wyatt Earp and Miss Kitty. For my son I found a pattern for a dress vest with the right lapels I was looking for. I used a beautiful silver and black brocade and black satin. I used a regular pants pattern with a pinstripe material. The white collar shirt is bought. I used extra black blanket binding I had laying around for his tie. I found the “sheriff” badge at a store on our trip to Gatlinburg. (found it online and just waited for the trip to buy it) wanted to make sure it was small enough. Then I learned a few months prior how to tool leather. I made from scratch his leather holster for his cap gun. I let him pick the design I embossed by hand. He chose horses and leaves out of my pattern book. Because his waste is so small I had to use suspenders under his vest to help hold his belt and pants up. The weight of the belt kept pulling his pants down. Suspenders worked great though.

For Miss Kitty I found a pattern with simplicity for an adult costume. I didn’t like the kid one. I modeled her costumes of the adult pattern. I used a leotard pattern to start off with. Made changes to the long sleeves to make V shapes at the end. I also made button holes in the end for her finger to go though. Then I made a skirt attached to the leotard. I made the front longer than the back to I could gather the front. Once I had the skirt put together I had to figure out the bustle and tail. I started with the tail. Created my own pattern pieces to the shape I wanted. Then I attached it to the skirt. In hind sight I should have attached the bustle first to the tail and then attached to the skirt but when you’re making your own patterns pieces you’re just figuring things out on your own. For the bustle I used 2 big square pieces and gathered them at the top and sewed from underneath around the top edge. I used matching feather colors to make a piece for her hair. I also used the feathers to create a fan prop for her. I used left over material from her costume and a lot of hot glue. I drew the shape I wanted for the bottom of the fan on paper. Then cut it out of really really thick interfacing, covered it with the extra fabric (made two). Then Hot glued the first layer of purple craft feathers. Then I used the craft ostrich feathers and added a few peacock feathers for color. Then glued the other bottom piece to the back the fan. There was no sewing involved in that part. Got the fishnets in her size at a dance supply store.

I know I go overboard especially with this Homemade Wild West Couple Costume, but I love making costumes! 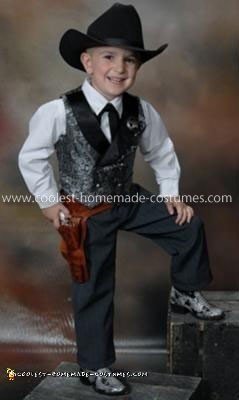 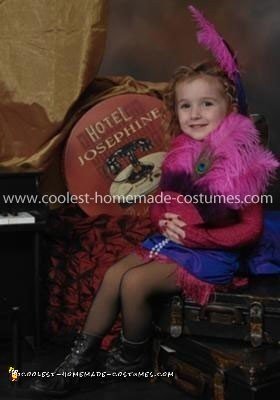