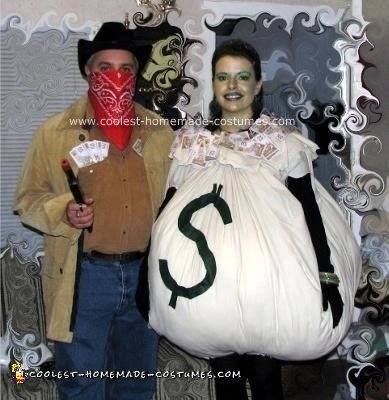 I wanted a unique ‘couple’ costume. I found the idea for the Homemade Bankrobber and Loot Couple Costume on the internet, but couldn’t find any pictures. I enlisted the help of my creative sister and we searched the local ‘thrift’ shops.

I knew I would need a thicker, double/queen sheet, preferably a sandy color, but would’ve tea stained a white one. I actually bought a couple to do a mock-up first.

I went to the local $ store and bought; green felt (for the $ sign), 6pkgs of playing cards that had pictures of $100 bills (we had more than enough), and a curtain tie back. Bought quilt batting and no sew tape at Walmart.

To construct the money bag, we laid the sheet completely out and I stood in the middle, we then made holes for my feet. We pulled the sheet up to see the amount of length that would need cutting off. We then made slits all the way around the edge of the sheet, leaving approximately 8-12in in length. We applied a liquid seam sealant to the slits. We used the no-sew tape to the leg holes and made a hem, instead of using an iron we used a hair straightener to heat the no-sew tape.

We cut the elastic edging off of the fitted sheet and threaded it through the slits, we then stuffed the money bag with the batting while I was in it and tied the top ‘around’ my neck. We then made arm holes and applied the liquid seam sealant to these as well.

Finishing touches: I tried the costume on and we trimmed the collar to the amount we liked. Attached the curtain tie back as the ‘rope’. I then cut out a $ sign from green felt and attached it to the bag with a hot glue gun. Using crazy glue, we glued two playing cards together, this way, it would look like $ from both sides.

We attached these to the top of the costume (all the way around) using a hot glue gun. I wore a black body suit and black tights under the costume and finished it off with black gloves and shoes.

For the bank robber costume; I bought a used suede jacket and roughed it up a bit and a used cowboyish shirt. At the dollar store, a cowboy hat, kerchief, gloves and a toy rifle. We glued together a few of the playing cards in a fan shape, and placed them in the shirt pockets.

Cowboy vs Indian in One Costume