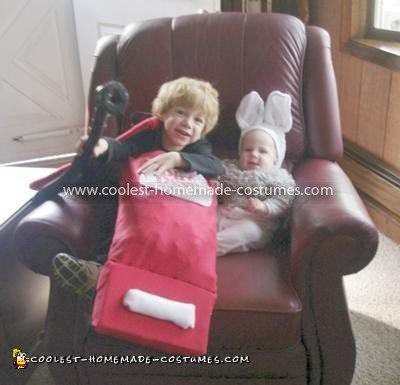 When I asked my 3 year old what he wanted to be for Halloween, I expected him to say something like a firefighter or monster. So imagine my surprise when he said he wanted to be a vacuum. Well, I shouldn’t have been too surprised since he is slightly obsessed with vacuums! I wanted his little brother to have a coordinating costume so when a friend jokingly said he should be a dust bunny I knew we had the perfect combination.

To make the vacuum costume, I started with a cardboard box. I cut it to the size I needed. With my handy hot glue gun, I attached red felt to my cardboard. I glued the bottom and the sides first. Then I stuffed it with newspaper until I got the shape I wanted and then glued the top.

For the bottom part, I covered a small box in red felt and then glued some black felt on the bottom. I made the light with white felt. I gave the light some dimension by stuffing it with tissues. I used hot glue to connect the 2 pieces and reinforced it in the back with felt. I found a picture of the Dirt Devil emblem online, printed it up and glued it on.

The backside of the vacuum costume was just another piece of cardboard. I took the hose off one of our vacuums and made loops out of elastic on the backside to string the hose through. I used black elastic to connect the front and back. I also made a handle. I rolled up some aluminum foil, covered it in black felt, and then glued it to a black knit hat. Then I bent my felt covered foil until I got a handle-like shape. However, he refused to wear the hat.

For my little dust bunny, I bought some dusty colored yarn. I cut lots of pieces of yarn and used my glue gun to attach them to a white shirt. My son had a set of white blanket sleeper pajamas so I layered the yarn-covered shirt over his jammies. I didn’t want the headband of the bunny ears to dig into his little head so he wore a white cotton beanie under the bunny ears.

The Vacuum and Dust Bunny Baby Couple Costume was a hit! People would chuckle at the vacuum and then laugh when they realized the baby was a dust bunny. My son was thrilled that mommy made him a vacuum.

The only materials I had to purchase for these costumes were red, black, and white felt, dusty colored yarn, black elastic, bunny ears, and glue for my glue gun. I already had the white jammies and white shirt for the dust bunny and black pants and shirt for the vacuum. I spent under $20 total for both costumes. 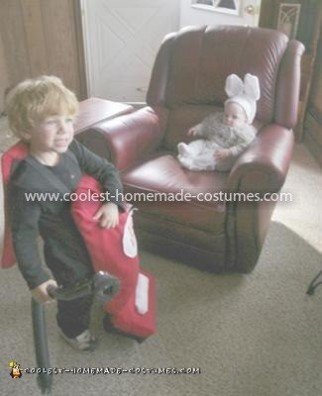 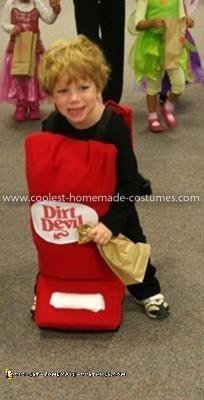 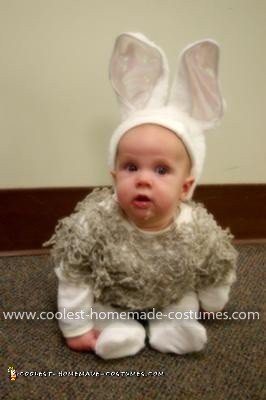