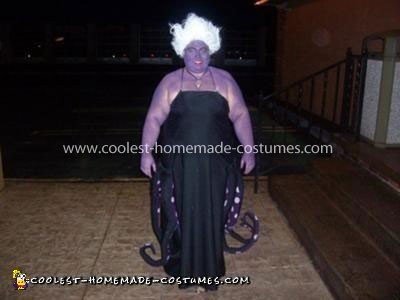 I wanted to go along with the Disney theme at work for our Halloween party, but there are very few “larger” characters in the movies. I decided that I wanted to be Ursula (the Sea Witch) from Little Mermaid. I looked at many different images of the original cartoon character, and also others interpretations of her online. I finally had an idea for how to build the Ursula from Little Mermaid Costume.

I got enough fabric and made a strapless black dress that went to the floor. Then I cut triangles of dark purple and black fabric and would sew them together. I used comforter stuffing to fill the triangles and inserted wire hangers to allow the arms of the costume some flexibility and character. Then I attached all the arms onto a piece of black fabric that I would treat like a belt. This way I could reuse the dress for other costumes if I saw fit. I used hot glue and a lilac fabric and cut many half dollar sized suction cups to attach to the arms.

I used a piece of ribbon to attach the seashell necklace, and drilled a hole into the shell itself. To give the shell the glowing effect (because that’s what it did when Arielle’s voice was inside) I bought tiny glow stick earrings and place one inside. This worked out nicely. For hair, I bought a “Marilyn Monroe” wig, and used white hair spray to style it. Used face/body paint to make skin purple and wore blue eye makeup with red lipstick.

This costume was fun, and really easy. Just took some time and planning. For sure was a big hit at the party as well! 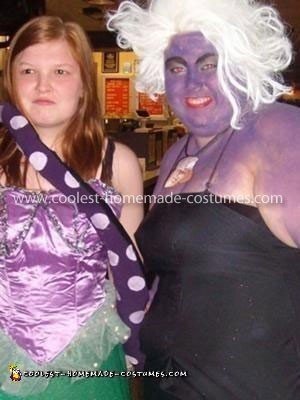