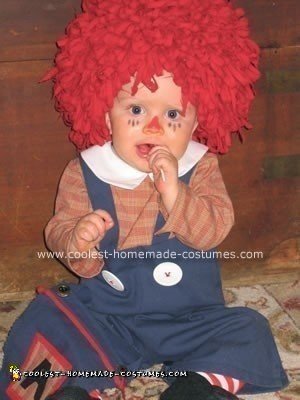 Our precious little Raggedy Andy had tons of photos taken of him this evening. He complimented his cousin who was Raggedy Ann.

The hair was made from a Talbots wool suit jacket that I purchased from the Goodwill for $5. Took it apart, washed/felted it, and sent it to a friend who cut it up for me. She sent it back and I pulled out my rug hooking goods to prepare the wig. Found a free hat pattern online, so I made a liner for him first to make sure it fit okay. I then drew the pattern onto the fabric for the wool then hooked the wool into the fabric (loop height was about 3” high) leaving about ½” around the edges to sew it together. After the wool was done and the wig sewn together, I stitched the raw edge in towards the wig to hold it down, then hand-stitched the liner on the inside (so that the wool wouldn’t irritate his head). Surprising enough, he kept it on for most of the evening. A lot of distractions helped.

The outfit was a short jumper pattern of which I lengthened the sleeves and pants, added large buttons, Velcro on the back opening for quick access, snaps on the pant in-seem, and used the Raggedy Andy colors from fabrics found on the remnant table.

The socks I had to purchase from a costume shop for only $5. They were for a larger child, so I had to customize them, also, to fit his little legs and feet. I later found tights at Babies R Us (since it is close to Christmas) that others may wish to use. His socks turned out great, though. Everything online was just more than we wanted to spend.

His shoes are made from felt. This was also a free pattern that was found online. Didn’t want to buy shoes he would only wear once.

His aunt made his bag to match the costume with “A” on it for his Harvest party goodies.

Although today is over, I plan on having our son put his handprint on his costume in white paint. I’ll then write his name with the year on it. I plan to do this every year as long as he is willing to let me make his costumes ;o). Just ran out of time before today. Thought it would be a fun way to pass them along.