I have always loved Raggedy Ann even as a little girl.

I decided to make the Raggedy Ann costume from just going to a thrift store and picking up a few things needed to make this costume. I bought a blouse that resembled the dress she wears with the blue flower design, a skirt that had the similar color of the blouse.

We did some alterations by shortening the skirt, and added elastic for the cuffs of the blouse, and added ruffles and Red riffraff for the bottom of the skirt, bought some used sheer curtains, which we made the apron and the bloomers from. The stockings were made from a red/white striped shirt that was cut and made into long stockings.

This entire costume was made home made and seemed to be the perfect idea. Cost around $ 12. 00 to make the entire outfit including supplies for the wig. I found the ” Baby Doll” shoes at the Thrift Store to go with the outfit.

The wig is fun. Started from scratch and used pantyhose for the wig cap. Here are the supplies I used to make it:

2 mops ( used the mop strings only) from the Dollar Tree Store.
Ritz Red Dye( Two boxes it took to get it the color I wanted) The directions are very very important to go by. I even used the stove-top method described on the box and simmered the mop strings in dye with salt over the stove for a hour. It did the trick! Second time is a charm. First time I dyed it was not the color I wanted at all. This is why I did it twice
Panty hose ( I cut the legs off, and sewed up the part I cut).
Styrofoam head ( I purchased it at a Beauty Supply store for under $ 4.00.)
Hot glue gun and hot glue stix.

I applied the mop strings gluing them onto the pantyhose (cap) until the entire head was covered. There is no method to this madness. Tried the wig on before I went much further to see what it looked like on). As I began to run out of strands on the uncovered part of the cap, I cut the one’s I had already applied shorter so I could use the additional pieces for covering the rest of the cap. I continued cutting the mop strings and used them to make sure the entire cap was covered completely so that the pantyhose cap didn’t show when I wore it on my head.

It turned out awesome. It fit snug and I didn’t have to worry about securing the wig with pins or it falling off my head. I even purchased a blue bow for the hair at the dollar Tree Store.
I won the Halloween Costume Contest and my costume was a hit.

I used Red lipstick and black eyeliner for the makeup. Just made big red circles on my cheeks and drew a few triangles under my eyes filling them in with more black eyeliner to make it look like exaggerated eyelashes. I applied the red lipstick to my lips and drew a line off each side of my mouth and it was perfect. 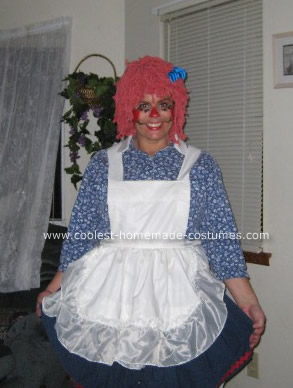 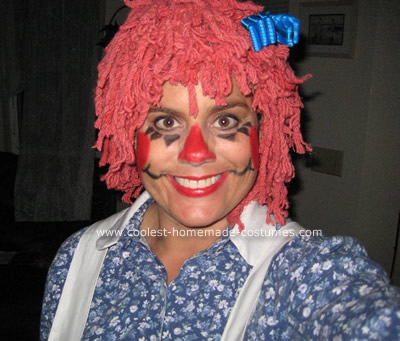