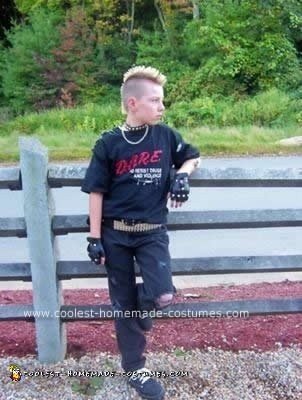 The reason this Punk Rocker Costume came about is because at the time my son had a mohawk that he just wasn’t ready to shave off yet..his baseball team got them for the championships that summer (yes ,they won so the other moms were less mad at me for letting my son start the whole mohawk idea).

So he was an extra in a movie that was a Halloween party scene and we didn’t have much choice with that hairdo so I went the 2nd hand store and found some used clothes, I found black jeans and ripped them up, and the t-shirt was perfect and I cut it up put it back together with safety pins. We used black eyeliner and kids tattoos. Bought some accesories and borrowed some. Changed the laces in some old shoes.

It looked pretty good when we saw it in the clips of the movie even though it wasn’t a blockbuster just a web series, it was fun and worked out great he did finally shave it off before Thanksgiving.