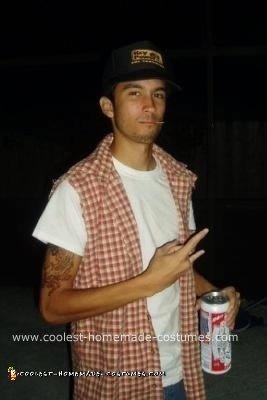 I always try to make my own costume that is somewhat original and will closely resemble what I am dressing as while still looking like myself. This time I choose to dress as a Homemade Redneck Halloween Costume. The basics of this costume are white undershirt, plaid/checkered shirt, ripped jeans, work shoes, trucker hat, and most importantly accessories.

For the undershirt I just grabbed one of my old ones and dabbed some coca-cola on it so it could look dirtier. I also used my old high school uniform shoes which look somewhat like work boots. Finally, I went to the nearest goodwill store and bought the most random trucker had I could find.

Finally, the most important part was the accessories. I had my sister draw a few tattoos on my arms with permanent markers. The first one was an eagle in front of an American flag (true redneck and patriotic tattoo), the next one was of a skull and crossbones with a banner underneath that said rock-n-roll. I also bought a 22oz can (tall boy) of Budweiser which I took with me everywhere (I even filled the can when I got re-fills from the keg).

I also made sure to not shave for a bit and went around with a tooth pick in my mouth. Lastly, you have to sell the costume by speaking with a southern accent and looking the part in pictures.