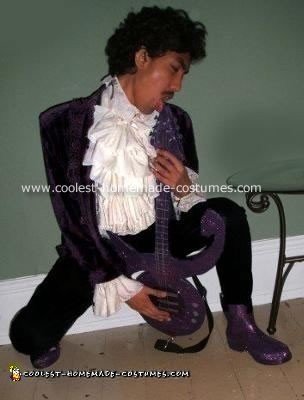 I grabbed a lady’s suit from what must’ve been the 80s, a curtain, a button-down shirt and some rubber boots at a thrift store. Picked up some cardboard from the local supermarket, and some wire, glitter, glue, clips, paint and tacks from a craft store, all for this Prince costume.

Since I couldn’t find a frilly sort of pirate shirt, the end ruffles from the curtain were sewed onto the button down shirt, and the cuffs of the jacket. The guitar was made from layers of cardboard, with extra bits to raise the ends so that the wire could be raised. Tacks were painted and put in the top of the guitar to for “tightening” the strings, and the whole thing, along with the boots which were cut down to look more like platforms, were painted purple. While the paint was still wet, I added the glitter to both.

Details on the guitar were done with Sharpies (black and silver). And a strap from a bag was clipped to the clips that were attached to the guitar.

Finally a two week mustache eyeliner, gelled hair, skinny jeans, and a symbol belt buckle made from cardboard, glued solid then silver Sharpied, later and I was Prince.

Prince Themed Homemade Costumes and the Coolest Office Ever!