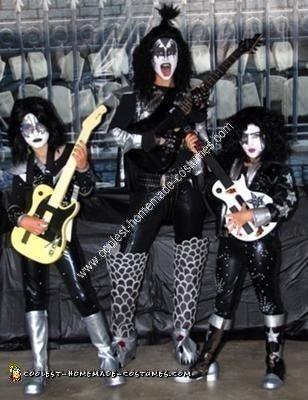 This year for Halloween my kids decided to be the rock band Kiss. Here is what I did and used to make the KISS Costumes.

I started out by making some boots to look similar to what the Demon Child’s Dragon boots look like. To make the Dragon boots I started with an old pair of boots that I found cheap at a thrift store. I bought sheets of grey foam, silver costume fabric, black costume fabric, and sequins. I wrapped the silver costume fabric around the foot area of the boot to sort of shape a head and glued it on. I took silver sequins, colored them red, & then glued then onto a black piece of costume fabric that I had cut into an eye shape. I cut out black pieces to resemble nostrils for the dragon & also cute out teeth with the silver fabric & glued them on. I cut the foam sheets into lots and lots of scale shapes. I colored them in with a black sharpie marker and glued them one by one onto the boot. Here is a picture of the Dragon boots before & after.

For the pants we had an old pair of black sequined pants lying around that we used. I have no idea why we had these pants to being with LOL.

We used old belts that were in our costume box for the chastity belt look.

For the hair we used a wig & I used costume makeup that you can buy at any Halloween or party store to do the face.

For the Spaceman costume, I painted a pair of boots all silver with fabric paint.

For the pants I used a pair of shiny black fake leather looking pants and added on little jewels. The jewels are stickers like you use to decorate cell phones etc…

For the top, I started with a black long sleeve leotard. I cut out pieces of silver fabric and used fabric glue to attach them to the arms.

For the hair we used a wig and for the makeup I used costume make up that you find at any party or Halloween type store.

For the Star Child costume I started with the boots. I used fabric paint to paint on the foot area & costume fabric for the stars & strip around the top of the boot.

For the top I found an old black fake leather type jacket for cheap at a thrift store. I used silver fabric paint to paint around the collar area, the front sides of the jacket, & the wrist area. I used silver brads for decoration around the wrist area and on some of the areas that I had painted silver. I cut out star shapes with black costume fabric & glued on lots of silver sequins to them. I then glued & sewed the stars onto the arms of the jacket. I later added on some jewels to the jacket as well.

For the pants I used a pair of shiny black fake leather type pants and put stick on jewels all over them.

For the hair we used a wig, the makeup was costume make up that you can find at Halloween or party stores, and the shirt was just a lucky cheap find from a thrift store. 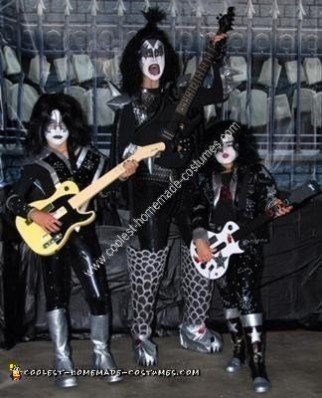 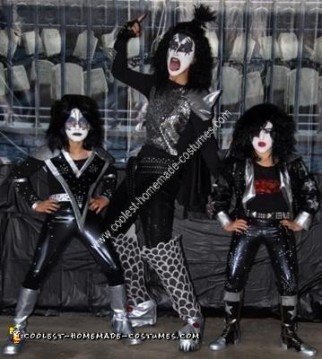