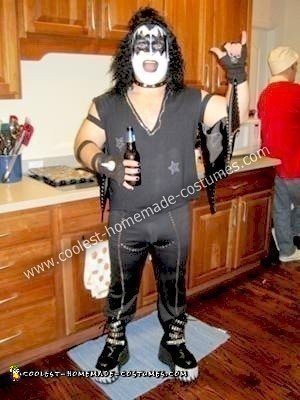 To make the wings: First we measured my husband’s arms and decided how far down his leg we wanted the wings to go. With the fabric folded in half, using his arm length as the maximum width of each wing and the length going down his leg as the maximum length of the longest inside point, we used chalk or a light colored pencil to draw and outline of the wings onto the backside of the black satin fabric. We used a plate as a guide for the arches between the points. We put one point at each end and one point midway. We then cut the fabric with about 1 inch extra in each direction to give enough area for a seam.

We then used a sewing machine to sew all but about a 4 inch area. (We added the Velcro after the wings were completely done. A more accomplished sewer should be able to add the Velcro straps at the first sewing stage so that the edges don’t show.) We then turned the wings inside out. We cut lengths of the metal coat hanger to the length of each point on the wing and inserted them into the wing. I sewed a seam on either side of each metal piece to keep it in place.

We added three Velcro straps – one each at the wrist, just above the elbow and bicep. The final step was to decorate the wings. We used iron-on rhinestuds from our local craft store.

To make the shirt: We removed the sleeves and then cut a v in the neck area. I sewed sequins around the v and neckline and then we ironed on some stars (also from local craft store). Note – you don’t want to have to tuck the shirt in as it will make the pants too bulky. Cut the shirt to the exact length to fit.

To make the pants: We ironed on metal rhinestuds in lines up the middle of each leg and around the crotch area. We used a shiny women’s athletic pants. To protect the material from getting more shiny, we always kept a towel or old t-shirt between the iron and the fabric.

To make the boots: My husband had large platform boots from a prior costume. We just added the “teeth” to the from using a silver paint pen.
To make the gloves: We were running out of time (guests had already started to arrive) and did not get to make the gloves as originally planned. The ideal plan would have been to take one pair of cheap black work gloves and cut all of the fingers off. Then cut two small holes – one on the inside of the pointer finger and one on the outside of the pinkie finger. Using the silver devil horns purchased from the store, string the string from the horns through the holes and then tie inside of the glove. If necessary, using black thread run a quick stitch over the thread running between the two horns. Instead – we ran out of time and my husband just hot glued one horn to each glove.

Make-up: We downloaded this template from Wikipedia. First, we put lots of moisturizer onto my husband’s face and let it be absorbed. (This helps a little bit when taking the make-up off later and reduces cracking in the make-up.) Using the template as a guide, we first applied white cake make-up using a make-up sponge and put it on fairly thick. We used white baby powder to set the white make-up before applying the black. To apply the black, we used a q-tip shaped make-up applicator to outline the eye areas and the triangle (willow’s peak) in the middle of the forehead. We then used a larger sponge to fill in the big areas and the q-tip type applicator for the smaller detailed areas. We did not have a colorless powder to set the black make-up so it did start to run a little as the night wore on. My husband also applied black fingernail polish.
Wig: We purchased the wig from E-Bay. Someone with longer hair could potentially tease and crimp theirs to get the same look.

We had a lot of fun with this Homemade Kiss Demon Costume – especially playing the guitar in Rock Band while dressed up as Gene Simmons.