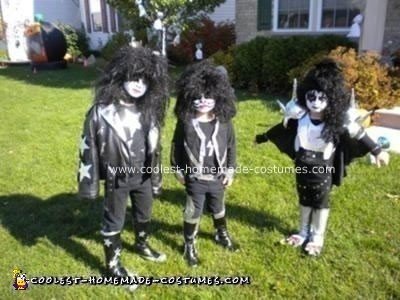 My boys, ages 7, 4 and 4, wanted a Homemade KISS Group Costume for Halloween. I went to a resale store and bought each one of them a black shirt, black leggings and a pair of black boots with heels (all of these items were purchased in the girls department – my boys weren’t thrilled about that).

The Paul Stanley “Starchild” costume was made by using silver chrome duct tape to make the stars for the boots, shirt, pants and on the sleeve of my son’s leather jacket. I found it a lot easier to lay strips of the duct tape on parchment paper, that way you can overlap to make the stars wider and bigger.

You can cut the duct tape much easier without it sticking when it’s on the parchment paper, yet when you are done, you can peel the tape right off the paper and it sticks where you put it. The back of the leather jacket (not shown) has the word KISS which was cut out of a silver car windshield window shade (which is like silver bubble wrap).

I cut a studded belt that was bought at the resale store to be the dog collar around his neck. Added a black wig and the make up and Paul was ready.

The Peter Criss “Cat” costume was made basically the same way. This was the black pants, shirt, boots and an added vest and silver belt (both bought at a resale store). I used the silver duct tape to decorate the boots, pants and vest and added the wig and makeup and Peter was ready.

The Gene Simmons “Demon” was made by using silver chrome spray paint on the boots. Gene has dragon heads on his boots with red eyes but we couldn’t find anything similar. My son wanted skulls with red eyes instead so we found plastic ones that were part of a Halloween decoration and crazy glued them to the top of his boots. I found iron-on studs at Walmart and decorated his pants with those.

To get the armour and spikes, we used my son’s hockey shoulder pads and used papier mache to make the spikes. Once those were ready, I wrapped them with the silver chrome duct tape. We used a cape we already had (either from Batman or Dracula costume) and attached it to the end of his sleeves and the back of his shirt, this way it came out when he raised his arms. Black wig with the top pulled into a ponytail like Gene has, some make up and Gene was ready to go.

These were really easy costumes, not costing much at all but so far they’ve gotten plenty of compliments.