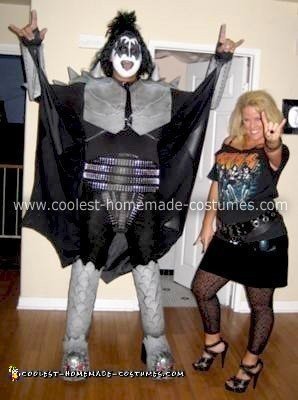 This Homemade Gene SImmons God of Thunder Halloween costume came out really cool but took me forever to hand make.

I started with a youth football shoulder pad set that I bought at the Thrift store for $6.00. After that, it was all Goop adhesive and flat foam that I bought at Michaels. I hand made the cones for spikes and the panels were also cut and layered.

I made the spiked arm band from the same foam mentioned above and, again, hand shaped the cones for spikes. I used Velcro to close the ends so I could take them on and off more easily.

The boots took the longest time. I bought 5″ platform boots from Demonia for $80.00, which I intended to cover. However, I didn’t want to ruin the boots by gluing directly onto them, so I made a foam base and then cut strips of scallops out of the same foam. I gooped each layer one at a time. I used Velcro to close the scallop wrapping over the boots.

As for the skull faces on the boots, these are hollow plastic skulls from the 99 cent store as I could not find dragon faces. I glued scallops all around them so they would blend in with the rest of the boots.

Once I had finished the Goop and foam preparation for the chest piece, arm bands and boots, I sprayed it all with metallic gray paint and then gave it a light coat of black. I also hand painted all the bolts to give them a metal effect, and used red glitter glue for the eyes on the boots.

I bought the black shirt and pants at Target for about $30.00, and my wife made the cape for me out of black nylon.

I made the large black belt from the foam bought at Michaels; I then bought four spiked belts from Target for $12.00 each, cut them up and glued the strips of spikes onto my homemade foam belt with Goop.

I highly recommend that you practice walking in the 5″ platforms. They take a few tries to get used to.

I was, by far, the most popular costume at the party. Everyone wanted a picture with Gene! I am keeping this costume because I plan on winning some money with it next year ! 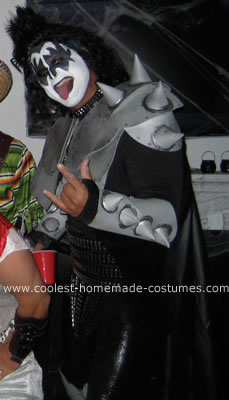