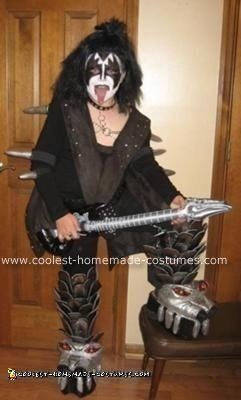 This Homemade Gene Simmons KISS Costume idea came from my 10 year old son. He has always been told he has a Gene Simmons tongue, so, it was inevitable that, one day, he’d wanted to be him for Halloween.

The bat wings were made with a black suede material (couldn’t find fake leather) with studs added. I cut 4 panels, 2 for each wing, added studs, then sewed together. At the top I attached 2, 2inch bands of black elastic and at the top, one loop of smaller black elastic to insert finger through for each wing.

I went to the girls section and bought a tight pair of black pull on pants, and black t-shirt, which I cut down the front. Then I took some of the suede material and cut into v-shapes, added studs, then put brush-on starch to give it stiffness and sewed onto the t-shirt. A cheap studded choker, and 2 cheap chain bracelets and attached them together with various large, round key-chain rings.

The spikes are handles from jump-ropes from the dollar store that were left over from Easter. They are carrots, spray painted silver then glued to the shoulders and elastic bands on the wings.

The cod piece is black suede & studs glued on top of a piece of the sun shade, then hand sewn to black panties. Add black belt

The boots were made from car sun-shades, cut into scales. I spray-painted a black spray down the middle, lower half of each scale, outlined them with black puff paint, attached to black foam sheets. I glued the foam to soccer shin guards. This part of the boots were attached with velcro that was hot glued to back.

The MONSTER heads were fashioned from a block of Styrofoam, cut with a Styrofoam cutter, then covered with Modge Podge and painted. The eyes were made with red glitter attached with black Velcro and thin elastic.

After this picture, MANY more studs were added to both wings and shirt. He wont 1st place in neighborhood contest! 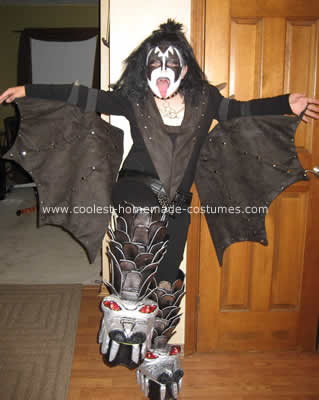 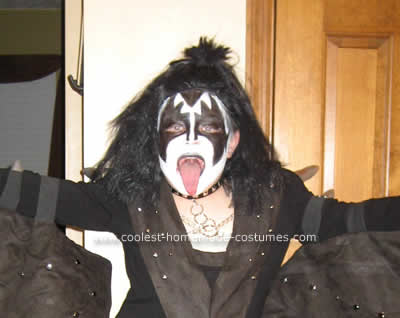