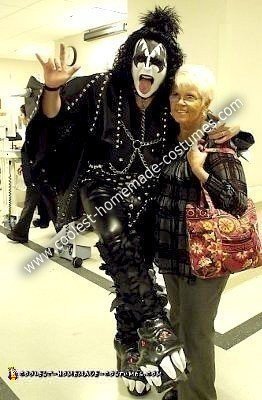 I started this Homemade Gene Simmons Costume about 7 years ago. It started very simple and has grown over the years to look as it does today.

The cape was made from pleather material bought at local sewing shops. It has two large “suspenders” which connect to the top of the cape near the shoulders and then run down across my chest to the waist of the pants. I then run a regular men’s belt through holes sewed on the bottom part of the suspenders. The belt is also run through the belt loops on the pants which helps to anchor the cape in place.

The outer part of the cape is covered with silver spikes made of shiny silver material filled with polyfill. The cape is also covered with approx 400 studs which I bought online. The front of the cape has two small wings that cover my upper chest which I added this year.

The pants are just regular pleather pants.
Lastly are the boots which are also new this year. Over the years I have tried many boot options but I was never really happy. This year I bought 6 inch men’s platform boots online. These were the base of the monster boots I made. I bought plastic monster boot molds on EBay. These were then attached to the platform boots using screws, fiberglass resin and a lot of bondo. I then painted them and added sequins for the eyes. The upper part of the boots around my shins are again pieces of pleather covered in tombstone shaped “scales” made from a shiny, black fabric. The scales are glued in place to the pleather and are attached to my pants using snaps.

All of this together makes for a great Homemade Gene Simmons Costume that I love wearing each Halloween.