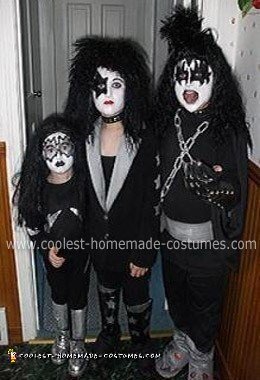 Here are our homemade Gene, Paul and Ace from KISS costumes for Kids. My kids won contests in our hometown and in a Radio Disney contest in our capital with hundreds of contestants.

Here’s what I did for this Homemade Gene, Paul and Ace from KISS Kids Costume:

Gene – I took a belt and pants from last year’s Clone Wars Obi Wan Costume, spray-painted parts silver and drew a monster face on the front of both boots with fabric paint. I bought plastic chains at Home Depot and painted them silver and attached them at the back. I bought a cheap cape, gloves, and choker at Party City along w/a Kiss
wig and make-up from Walmart. Design was loosely based on Gene’s Love Gun Suit.

Paul- I took an existing coat and spray-painted the lapel silver. I cut out stars from silver fabric and glued them onto the coat, pants, and boots. The boot wraps were cut off from last year’s Clone Trooper costume and spray-painted. The wig, choker, and make-up were bought at Wal-Mart. Design was based on Paul’s 1978
Love Gun suit, boots were based on his Alive boots.

Ace- I bought a plain black shirt and pants. I cut out lightning bolts of silver fabric and pasted them on. I also painted silver some shoulder pieces from an old Wolverine suit and glued those on as well. I used some of the arm armour from that same Clone trooper costume mentioned above and spray-painted some old shoes silver. Wig and make-up were from Wal-Mart.
I mixed parts of Ace’s Alive and Creatures of the Night costumes for this design.

I’m not sure what this all cost me, but I am sure that it cost less than half of what the official Kiss kids costumes would have cost me and I think they came out just as good or even better!