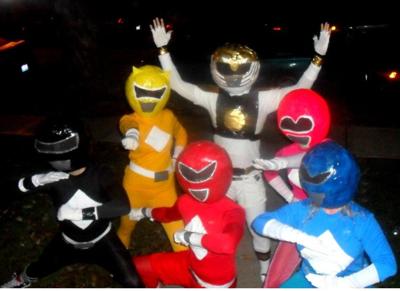 This was our second Halloween at Ohio State and wanted a great costume for our friends costume party. We had the idea of Power Rangers but we could only find the pink and red ranger so we decided to make them, helmets and all. We had a great time making them, but an even better time Halloween night.

We had a blast with these costumes. We only called each other by our “Power Ranger names” the entire night. We got a lot of attention at the party, our friends loved the costumes as did all of the people who stopped us walking down the street to take pictures with us, and yelling what their memory of the Power Rangers were (I found out a lot of guys had a crush on the Pink Ranger). We went out to eat that night and we were allowed to cut the 30 minute wait because we “had to get back to saving the world.” Overall it was not only one of my favorite costumes, but one of my best college memories with my friends.

How to make the costume:

The Helmets:
The helmets were made out of paper mache, spray paint and duct tape. We used balloons to shape the paper mache, and covered them in the free newspapers that they hand out on campus, and the glue and water mixture. We let them dry overnight (I recommend two to three days because we needed to use hair dryers to finish drying them.) We spray painted them, then cut the bottoms and slit the backs so our heads would fit. We cut out the eye hole and taped in window mesh so the eyes were black but we could still see. We then outlined and detailed the mouths in duct tape.

The belts:
The belts were simply made out of white and silver duct tape.

The gloves:
We bought these at the local Halloween store, and used black duct tape to apply the stripes.

The boots:
We found knee socks with stripes in each color of the Power Ranger, but you can use any knee high sock, and the black duct tape to match the gloves.

The body suit:
We bought off brand under-armor at Target, in the men’s and girl’s section with all of the colors available. We used white duct tape to make them into Power Rangers. We also bought women’s’ leggings/girls’ tights at Target. I had a pink skirt for the pink Power Ranger. The white Power Ranger required gold duct tape which we could only find at Wal-Mart and we used cardboard to make his shoulder armor.

•Tips:
Don’t over inflate the balloons, they will pop before they’re dry and ruin the shape of the helmets.
Make sure you keep the helmets in one place, or the glue will be EVERYWHERE.
Pop the balloons quickly, they’ll hold their shape better.
Some of the boys chose to wear shorts over the leggings out. We believed it was for the best but it was personal preference. 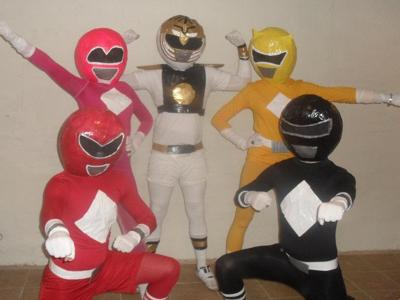 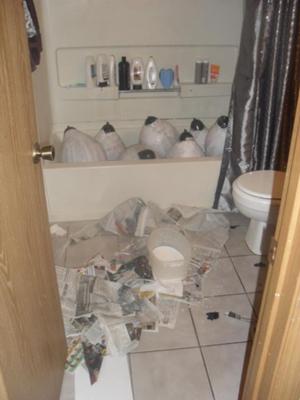