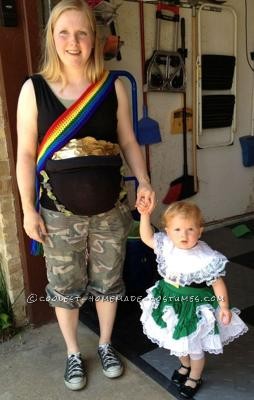 I was going to my niece’s costume birthday party and had to think of something other than a pregnant fairy. I decided to become a Pot O’ Gold at the end of the rainbow!

I already owned a black shirt, I then used a rolled up black tank top as the rim of the ‘pot’ and safety pinned it to the shirt. I found a cool rainbow scarf on eBay for cheap and tied it from shoulder to hip. I made 9 – 4 leaf shamrocks (out of 2 old green shirts) to outline the ‘pot’ to give it definition; I then also pinned the shamrocks. I just happened to have 2 different gold wrapping paper rolls, which I then cut out different sized shapes of ‘coins’ which I glued to tissue paper and then pinned to shirt  (I used about 20 safety pins).

I was lucky enough to have a ‘wee- leprechaun’ escort me to the party so no one jacked my gold! (I made a  “golden ”  buckle and put it on a Southern Belle dress – instant Leprechaun).

SO  simple and easy  which for any pregnant woman is good. 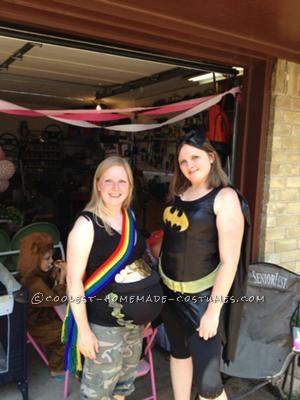