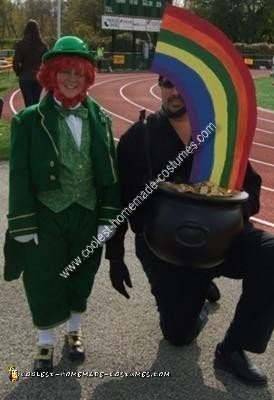 The luck of the Irish struck as my son wanted to be a leprechaun. His dad has always been his ‘side-kick’ so of course he became the pot-of-gold.

The Leprechaun and Pot of Gold Couple Costume was made from an Uncle Sam and Benjamin Franklin sewing pattern. Green felt was chosen for the jacket and pants due to it being the perfect shade of green. Gold decorative trim was glued into the jacket and pants to make it look more expensive. The vest and bow tie was made of green printed cotton that looked like it had shamrocks printed all over it but were really small flowers.

The Dickie was a simple white cotton fabric. The wig was once a blonde Shirley Temple style wig that was gotten at resale shop. It was cut up, spray painted red and the curls were sewn onto red felt cut to form around my son’s face for the beard. The felt was sewn to the wig by elastic strips. The hat was a former St. Patrick’s day decoration that was repurposed. St. Patrick’s Day buttons were added for flair. Dress shoes were adorned with Velcro buttons that held gold foil covered cardboard buckles. The white stockings were white tube socks.

For the pot of gold I used a black plastic cauldron. It was cut in ½ then it was covered in gold Mylar and gold plastic coins were glued to the Mylar at the top of the pot. Black ribbon was glued and Velcroed onto the pot edges so it could hang sandwich board off of my husband’s shoulders. The rainbow was created from foam core board that was painted to be a rainbow. It was held into place by black ribbon by the pot. At the mid-section the rainbow was held on by Velcro and ribbon tied behind the neck.

Finally, a knit cap had Velcro attached to hold up the rainbow’s arch above his head.