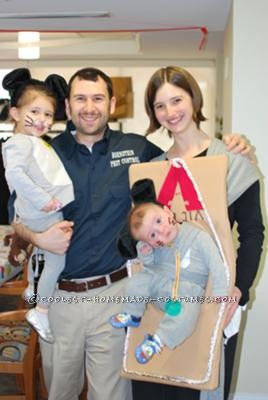 This Pest Control family costume had many parts to make, but was worth it.

First, the central part – the young mouse caught in a trap:

The baby is affixed to me using a gray Moby wrap baby carrier that I borrowed from a friend. To make the trap, I took a big rectangle of foam that I got at a crafts store, and used a hot glue gun to attach big pieces of felt all over the front. I wrote “Victor” on it (the brand of mouse trap) with marker, and used red felt to create the logo – also attached with hot glue. The silver part of the trap is extra TV cable wire that we had around the house, covered with tin foil, and glued around the border.

I cut a slit in the center (roughly) of the mouse trap, dressed the baby all in gray, and put him in the Moby. Once he was secured in there, I fitted the trap around his body, pulling him through the front. Add on mouse ears, face paint, and, voila.

My husband bought a thick blue work shirt, and brought it to a mall kiosk for them to embroider “Bornstein (our last name) Pest Control” and he was the exterminator, walking around with a big flashlight on his side.

Our daughter was almost three at the time, so we dressed her up as a mouse and she didn’t know the difference. Her costume was gray leggings, a gray shirt with a big white spot on the front made from felt with a sticky backing, mouse ears, face paint, and a black shoelace tied around her waist for a tail.