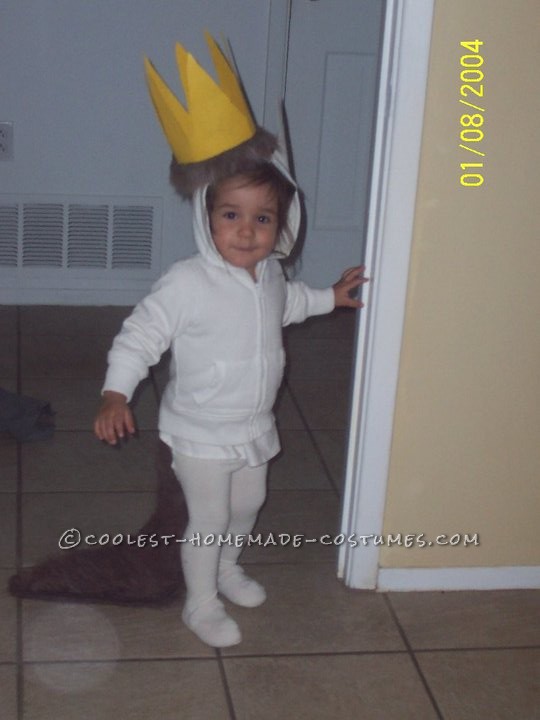 This Max from Where The Wild Things Are costume was complete no-sew. All hot glue.

1) I wanted white footey pjs but had the hardest time finding them. So I picked up a white hoodie and white opaque (knitted) tights. You can see they were slipped over her shoes to be as accurate as possible, this was a big problem when we got inside the building because she kept slipping. Next time I would opt for leggings.

2) I cut out 2 diamond shaped pieces out of white felt and bent them in half gluing them to the hoodie to create the pointy ears. Next I got about a half yard (which ended up being a lot) of the fake grey fur. I cut it into two football shaped lengths and glued them together with the wrong side in so that the tail was big and flat and really dramatic. I safety pinned it to the hoodie because I was worried the glue would keep it from moving. If you pin it, you may have to use several pins because kids stepped on it and it came off several times. Maybe even make it shorter.

3) I measured her head with the hoodie on and make a crown by cutting yellow felt with dramatic spikes to look like Max’s crown. I glued a thin strip of the fake fur from the left-over material from the tail around the bottom edges. I safety pinned this to the hoodie, then made sure her hair was in a braid and bobby pinned the hoodie to her hairline. This kept her from pulling it off ten seconds into the night. It frustrated her a bit, but she got used to it and it helped keep her warm.

My little one is loud and dramatic. Max’s character was perfect for her! She won best storybook character, (her brother took best homemade costume, check out his Luchador costume!) These were 2 of the 3 costumes awarded that night! My kids get very into Halloween and at least one member of my family has won a costume contest every year for the past 7 years. We love to share our ideas! Have fun and we hope your costume turns out great too! 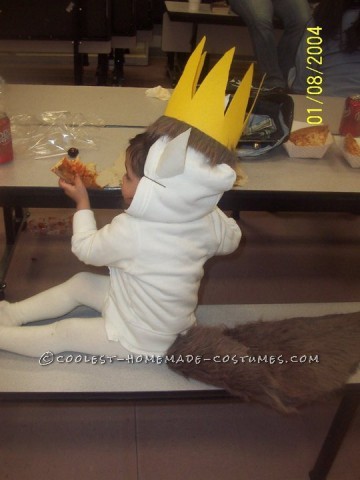