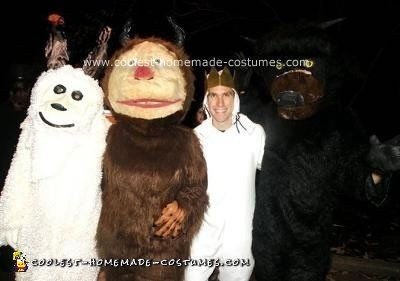 Ever since I heard that ‘Where the Wild Things Are’ was coming out in the movies I decided to put together a costume for one of the monsters. I had seen many Max costumes, but not too many monsters.

After seeing the previews, I knew I was going to do a Carole costume.

I started with paper-mache’ing a large balloon (the kind car dealerships use). Took a few coats of paper mache and days to dry. I created 3 heads – one for me, one for Dave, and an extra.

While the head was drying, I set about finding the fur I wanted to use. Due to time constraints and costs I ended up purchasing a werewolf costume to use the fur suit. I could have sewed it myself, but I could not for the life of me find brown craft fur in the amount I needed. I went to Michaels, AC Moore, and Joanne Fabrics, but they only had black and white fur.

To the big round paper mache head I added the features to the face with cardboard and some foam balls. I used fabric glue for the lighter furry cream colour material on the face.

I started pasting on the back of the head the sheets of brown fur that I had ordered off of createforless.com. They came in small sheets, so I had to do the best with a patchwork. Still didn’t have enough brown fur, so I went to AC Moore and found some long strips of embellishment craft fur in brown, that didn’t quite match the fur of the head and body, but I figured it would do. I layered those strips around the face and used one for the tail.

I put on the finishing touches for the face. I used two white oval shells that were in my beading supplies as the eyeball. I painted them with the design I wanted for the eye. I added red paint to the fur on the nose to bring it out a bit. I cut out cardboard for the lips and painted it red.

I was in quite a rush to get the costume done for a party that night! So the first time I wore the costume I didn’t have all the details added.

Did I mention my friend Dave was sharing the same space to make his Bull head? And that I was putting details together for a Max Costume including sewing the hood, making a crown, and sewing and stuffing a tail? We also opted to buy footed pajamas, which I sewed the hood and tail to.

Dave followed pretty much the same steps I did, but with a little more frustration. He was being such a perfectionist! We also opted to buy a gorilla suite instead of sewing it ourselves. I worked until I had to leave. Then while I was gone Dave added eyebrows for me to Carole’s Face.

The costumes (Max, Carole, and Bull) debuted well that night at the party. Not much visibility in the Where the Wild Things Are group costumes, and drinking was impossible without a straw!

Also realized that the heads were hard to keep stable, so after that night I installed some ropes that went from the head and to my belt loops which kept the head steady (turning, when I turned), but made the head a lot more difficult to take off.

For the next night out I finished up the Carole head. I added horns out of toilet paper rolls and aluminum foil covered in faux leather materials. I used an extra strip of leather for the nostrils and painted some more detail in the eyes.

For the next night out we added an Alexander. My friend was sad because her costume plans had fell through so I decided to make her costume in 2 days. Fortunately I had made 3 paper mache heads (an extra in case I goofed). I followed the same process before, but I did the head differently, cutting the head so that it fit like a helmet. Added some details in cardboard and foam ball before gluing on the curly fur. Then added horns made of wire, covered with brown fabric. Other facial details (eyes, nostrils, mouth) were made of cutouts from the leftover faux leather.

I used fabric glue for everything. The head worked a little better than the Bull or Carole head as it was a little easier to take off/on, but still hard on the peripheral vision and impossible to drink through. Since I had a limited time to get this one done I actually sewed the suit by hand. I used the pattern from the Gorilla Suit.

The fun part was wearing our Where the Wild Things Are group costume to the “Night of the Living Zoo” event in Washington, DC and winning the contest!!! Only groups of three or more could enter their contest and we bagged it! Although Alice in Wonderland gave us a run for our money!

Coolest Homemade Where the Wild Things Are Costume

1 thought on “Coolest Where the Wild Things Are Group Costume”