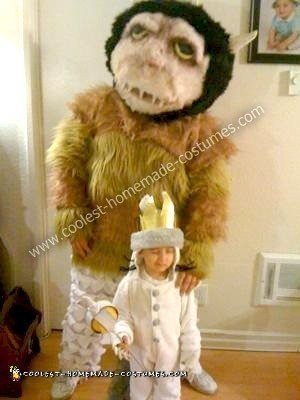 “Where The Wild Things Are” was my favorite book as a child and I must have read it over a hundred times as a boy. I have a three year old son now, and he loves to read this book at least two or three times a week.

For Halloween this year he said he wanted to be Max, the boy character in the book, and I thought that would be awesome since Halloween happened to coincide with the movie premiere of the book this year. I then decided I would go as Carol, one of the Wild Things, and began researching how I would make this costume. However, I had made up my mind that the book illustrations would take priority.

I basically researched the best way to make a large mask and decided to go with paper mache. I bought a large punching balloon, with a rubber band attached to wrap on your wrist, which retails at six for $2 at Target. My son helped me wrap the balloon, which would become my head, in paper mache.

Once it dried, I used paper cut-outs of the nose, lips and muzzle of the creature, to get sizing and shape. I taped them on and stuffed them with newspaper to give them some basic 3D form. After it was secure, I attached more layers of newspaper and tape and built up the proper look and feel of the facial features.

I rolled up a ball of newspaper for the nose and wadded up more tape to force the form of the nose and to secure it to the face. I built a mouth, by edging a fold along the lips with thick folded newspaper, and aimed to cut it out to use as my peep-hole, once it was paper mached.

I also rolled up some newspaper to form two cones for the horns, taped them to the head and paper mached them, so they would fuse to the head.

I used my son, throughout the procedure, as a foreman, to check if the look was right, and he let me know if something was wrong; he never ceased reminding me that it needed fur and teeth.

Once the head was dry, I researched a puppeteering website to see if I could find a way to make the eyes blink, in order to add some character or life to this Wild Thing; after all, they are feared for “rolling their terrible eyes”. I found a man who used plastic spoons to make eyes and a thin wire rig to cover the eyes; this would essentially create an eyelid frame mechanism that, when pushed or pulled, would allow the puppet to blink.

I, however, needed something large enough for the head so I used 99¢ ladles and cut the handles off. I painted an eye on the back of the ladle, and bent a wire hanger to form this sort of “U” shaped eyelid frame over the ladles and ran into a hole in between the eyes. Puppeteers use their thumbs to sort of flick the lever to make the puppet blink, but since this was on a much larger scale, I had to bend the hanger down to my forehead, inside the mask, and simply nod my head. This nodding movement prompted the lever inside to blink the Wild Thing’s eyes. It worked out really well.

I looked online and saw that a lot of the previous costumes used paper mache, but only covered the back of the head with fur and not the face. I decided, or rather my son decided, that we would go for the full fur look.

I went to Michael’s and picked up two $2 packs of white short hair fur for the face. I looked at pictures of Carol, as portrayed in the movie, and studied how the hair grew. I then cut the fur and hot-glued it to the paper mache head, copying the style adopted in the movie.

I glued two triangular pieces around the eyes for eyelids and had my wife stitch them to the wire frame, leaving extra material to be gathered to allow the eye to open and close when the lever was moved.

I went to the Downtown LA fashion district and picked up some bargain nappy fur for $4 a yard for my Wild Thing Body, and had to pay $14 for a yard of nice medium-length black fur for the head and beard. I glued the black to the head and left gathered areas, to make it look more matted and rough than well groomed. I used some of my wife’s old makeup powder to tint the white facial fur. I realized I could paint it and she had tons of old makeup she didn’t use or want. This worked so well, and I was able to blend shades and tones and create depth in the fur.

For the teeth and claws I simply folded triangles out of newspaper, covered them in masking tape and shaped them how I wanted. For the teeth, I used white glue and toothpicks and just jammed them into the mouth area; they stayed surprisingly well in place. I would’ve hot-glued them on but I ran out of glue sticks. The claws were done in the same manner, except I rolled a sort of handle, taped it to the claws and glued a patch of extra fur on the top side of the hands.

I purchased an orange thermal from the Goodwill and a pair of gray sweat pants for about $20. At first, I was just going to spray-paint yellow stripes across the orange thermal and spray feather and scale patterns on the pants with black paint. However, my son stated I needed fur, so I found the cheap fur downtown and decided, for $4 a yard, an extra $12-$16 would be worth it to have real fur for a body.

My wife then cut the fur in stripes and stitched them onto the thermal in a striped pattern that follows the look and feel of both the movie and the book. It looked awesome and was real mangy, like a wild beast, which was perfect.

Sewing my pants was very time-consuming for my wife, since I can’t sew. She also sewed my son’s Max costume, out of large bathroom towels. We bought about four towels at $2.50 each from Walmart, not knowing how much it would take to sew his costume. In fact he only used two towels.

Using the extra towels, she cut out leaf shapes from the towels and sewed them onto my pants, sort of staggering them like shingles, one layer on top the next. It looked so cool and awesome and they moved and flowed as I walked; this was possible because only the tops of each leaf were sewn on, leaving the bottoms to flap around and move.

The final touch, really, was the tail. I had a lot of black left over and my wife cut it into a cone shape and stitched it together; she then sewed it to the back of my orange fur shirt. She had me sit down so she could sew it on at a spot where, whenever I had to sit down, I would not be sitting on my tail. This worked well as I wore it to work, and it would have been lousy to sit on a thick tail all day!

Best of all, he was, for once, the King of the Wild Things and my King. 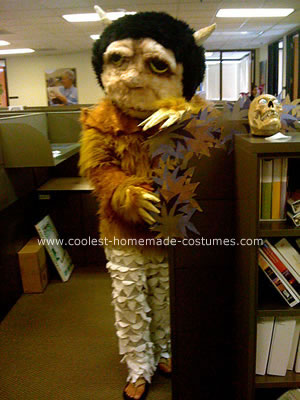 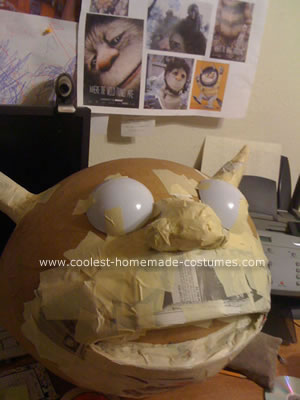 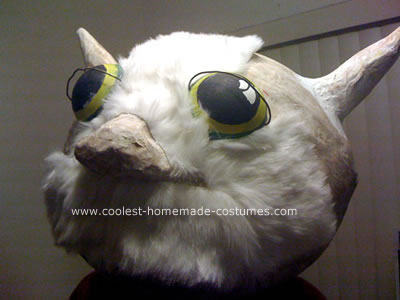 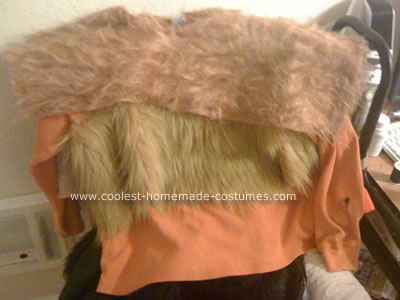 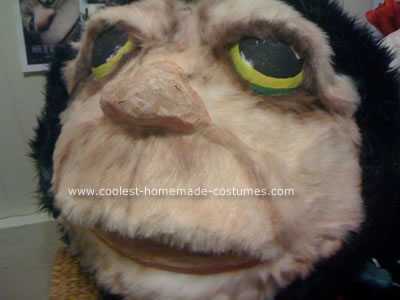 Coolest Homemade Where the Wild Things Are Costume

Where The Wild Things Are – Amazing Couples Costume

Coolest Homemade Where the Wild Things Are Halloween Couple Costume

Original Where the The Wild Things Are Halloween Costume