Our sons are infatuated with Michael Jackson and his music. When asked what they wanted to be for Halloween, our younger son immediately yelled, “Michael Jackson!” Not too pleased with the store-bought varieties, we decided to make our own Homemade Little Michael Jackson Costume. So, we started out the suit our oldest son wore in our wedding to create a Michael Jackson during his famous Billy Jean performance costume for our younger son. Since I cannot sew at all, I bought stitch witchery and used that to turn the lapels inward, shorten the sleeves, and to iron on white ribbon on to the pant legs. He borrowed older brother’s white under shirt (which I used stitch witchery to make into a v-neck), and used the black dress shoes from the wedding, as well.

The wig, glove, and glitter socks were all purchased from a Halloween store, as was the fedora. We then slapped a little baby powder on his face, added mascara, eyeliner and a bit of red lipstick. Voila! Michael Jackson ready to moonwalk to Billy Jean! 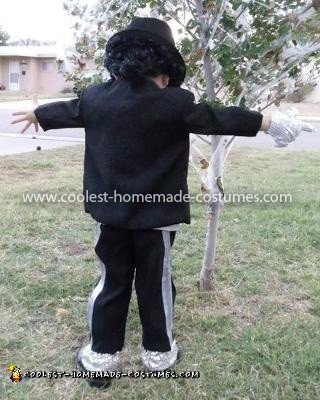