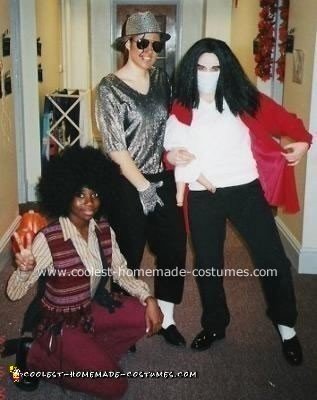 Not only has Michael Jackson’s career evolved over time, but so has his appearance. This group costume highlights the most memorable looks throughout Michael’s career, from “Young Michael” to “80’s Michael” and up to “Present-Day Michael”.

“Young Michael’s” costume uses the bright, bold fashions of the late 60’s and early 70s which include colorful pants and shirt, and is accented with a fringed vest and platform shoes. These were the days when Michael was still black and proudly sported his ‘fro.

Next Michael evolved into his ’80s ‘Billie Jean’ look which was all about the sparkle. The “80’s Michael” costume features a sparkly shirt, short black pants to show off the white socks, a sequined hat and of course the iconic sequined white glove. The look is completed with a visibly paler Michael, aviators and a few strands of Jheri Curl.

Most recently we have seen Michael become almost an entirely different person. The last costume, “Most Recent Michael”, includes Michael’s latest fashion favs such as the plain white T, unbuttoned red shirt (perfect to fan dramatically when singing the Free Willy theme) and of course the black pants, white socks and black loafers which have become a Michael staple.

Our “Most Recent Michael” is incredibly pale with long, straight black hair and is often seen wearing a face mask. Michael also brings his son Prince Michael II along and may even hang him over a balcony railing!

We found the general idea for the costumes on a website and came up with each individual look on our. All of the items used to make the costumes were either items we owned or were purchased at a thrift store. The sequined hat and gloves were made by individually gluing sequins on each which probably the most complicated part of making the costume. The rest was really about picking out outfits that fit those iconic Michael Jackson looks.

The best part was that we just had a lot of fun getting in every little detail and dressing up!