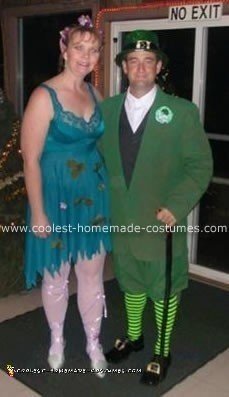 A friend of mine gave me the idea for the leprechaun costume. We bought a green suit from the Salvation Army store and cut the pants to make the knickers. I sewed in elastic just below the knee to give the right effect. The pieces of material that were cut from the pants were sewn to the back of the jacket to give it a coat tail effect.

The entire suit was then sprayed Kelly green with floral spray paint. The shirt is just a collarless white shirt. The vest was just a gray vest we picked up at the Salvation Army store. The hat was purchased at a party store although I did add the black ribbon and “gold buckle”. The buckles on the hat and shoes are just pieces of gold lame ribbon that I cut slits and inserted the black ribbon.

We bought the tights at a Halloween store. The walking stick is an authentic Irish walking stick that we found at a flea market for $2! The flower is a St. Patrick’s Day prop. He also had an old man mask that finished the leprechaun look.

The Irish Fairy costume is a silky long night gown that was bought second hand at the Goodwill store. I cut it jaggedy at the bottom and stapled leaves and flowers to it. The left over flowers and leaves are woven in my hair. The elf ears were purchased at a costume store. I’m wearing white fishnet tights and have purple ribbon laced around my legs. The shoes are ones that I had left over from a wedding. I purchased a set of fairy wings to complete the costume.